The 10% increase in trucks brought the truck-to-load ratio up 5%, to 3.90. The average ratio of trucks to loads is up 28% compared to October 2018. Capacity is up 11% year-over-year, TransCore reports, with October marking the highest capacity for any October in Loadlink’s database.

Western Canada led the gains within Canada, specifically the lanes: Calgary to Surrey; Edmonton to Surrey; Calgary to Langley; and Regina to Calgary. Those lanes saw monthly volumes go up an average of 104%, TransCore reports.

Montreal saw improvements in cross-border loads, with the Montreal to Chicago lane up 7%, marking its strongest showing of the year. The Montreal-Detroit lane saw volumes spike 275%, peaking for the year. 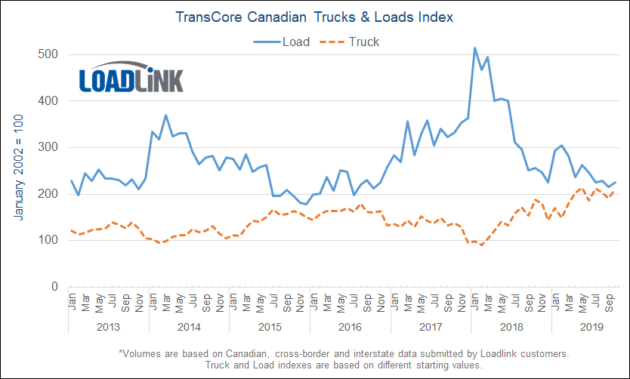