However, TransCore said load volumes are still higher than average, setting the bar for a strong year. Even with the dip from January levels, February load volumes were the second highest ever recorded. They were also up 74% year-over-year.

Equipment postings were down 9% from January, and 30% year-over-year, resulting in a truck-to-load ratio of just 0.85. Last February, there were 2.11 trucks chasing each load.

“The indicators for increasingly higher-than-usual demand for trucks were first noted on the Freight Index at the end of the third quarter of 2017, when the supply of loads were increasing at a higher rate than truck capacity,” TransCore reported. “Legislative changes for carriers that came into effect in January 2018 exacerbated the tightening of the spot market demand and capacity.” 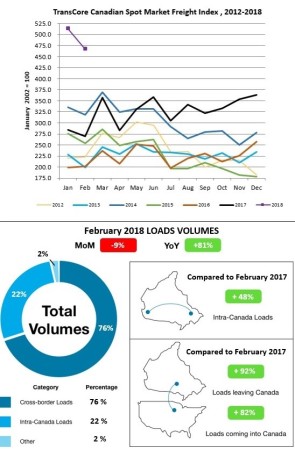