December cross-border load volumes were “exceptional,” TransCore reports, marking the highest year-over-year increase in recorded history for the month of December. Increased volumes coincided with a reduction in truck volumes, resulting in a healthy truck-to-load ratio.

Load volumes ended 2016 on a high note, the opposite of 2015, when volumes diminished towards the end of the year.

The 12-month truck-to-load ratio was three trucks for every available load through most of the year. December marked the first month the ratio fell below that average, improving to 2.26 trucks for every load, compared to 3.18 trucks per load in November.

Cross-border loads into Canada were mostly destined for Ontario (57%), followed by 26% headed to Western Canada, 15% to Quebec and 2% to Atlantic Canada.

The top equipment postings consisted of dry vans (52%), while reefers accounted for 24% of postings and flatbeds 18%. 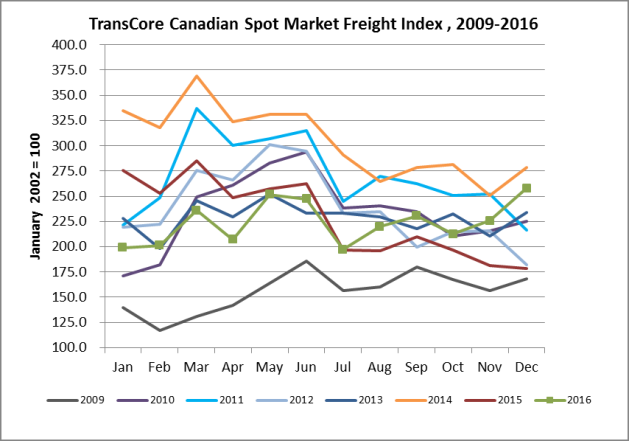