Daimler-owned Freightliner and Western Star grew their Class 8 truck sales over last year’s totals for the month as did Paccar’s Kenworth and Peterbilt. The remaining manufacturers suffered setbacks during the month compared to the previous year.

Last year will end up as one of the best for truck sales over the past 15 years.  Overall, the 2,421 Class 8 trucks sold in November 2014 made for the sixth best November results since 1999.

Freightliner was in the best position of all Class 8 manufacturers through till November. Not only was it maintaining its commanding market share lead but it had also managed to grow its sales over the previous year. Kenworth retained second place in market share, however its sales YTD November have slipped from the previous year. The most impressive gains, however, were posted by hard-charging Volvo, which has shown a significant increase in year-over-year truck sales and market share.

With one month left to close out the year, Freightliner controlled one quarter of Class 8 truck sales in Canada while Kenworth had a 17% share and Volvo had risen to 15%. 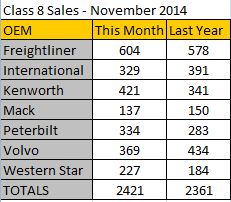 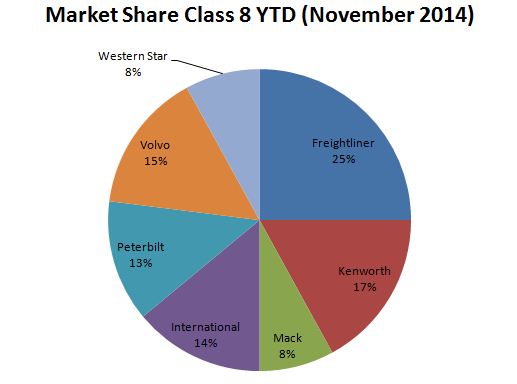