TORONTO, Ont. – A record-setting year for Canadian spot market load volumes continued in May, according to the latest data from TransCore Link Logistics.

Intra-Canada loads accounted for 29% of volume and amounted to a 35% increase year-over-year. Cross-border loads were up 39% y-o-y (leaving Canada) and 12% y-o-y (entering Canada).

Equipment postings continued to rise, up 17% from April but down 7% compared to May 2017. The truck to load ratio was 1.52, with a 17% increase in equipment postings from April. This means there were 1.52 trucks posted per load, up from 1.32 in April but tighter than the 2.02 trucks chasing every load in April 2017. 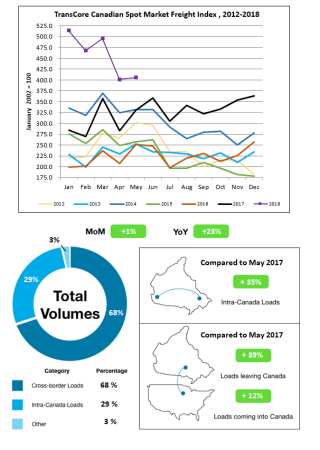