That George Sutherland even bothered to show up for work on the second day of his new career, given the disastrous nature of his first day on the job, is a surprise. That was 20 years ago. He’s been showing up every day since then and piling up the safety awards and accolades along the way.

He has a new one to his name. Sutherland has been named the 2014 Truck News Owner/Operator of the Year, for his industry advocacy, safe driving, willingness to help others and his business acumen. Sutherland had an interest in big trucks since childhood and decided in 1994 to obtain his A/Z licence. He went to a driving school and after about 40 hours behind the wheel, passed his driving test and was ready to embark on his new career. He applied for a job and the owner handed Sutherland the keys to a tractor hooked to a tridem trailer.

Sutherland asked which driver would be accompanying him and the owner said, “You’re on your own,” he recalled. “They said ‘If you can make it back by the end of the day, no accidents, you’ve got the job.’ So off I go in this single-axle truck, no idea how heavy the load was because, you know, it didn’t really mean anything to me.”

Sutherland got onto the 401 and the trailer began swaying like crazy. He was driving just 35 mph and trying to maintain control. When he arrived at his destination another driver noticed the trailer’s lift axle had 105 psi when it should have held 55 psi, causing the poor handling. “He says ‘How did you even get here? That thing must have been snaking all over the highway! You were running on one axle!’”

Sutherland unloaded and went back to the office, having spent eight hours to make one delivery.

“I thought there’s no way I’m going to have a job,” Sutherland recalled. But to his surprise, the owner hired him on the spot.

A lot has happened to Sutherland since that first trip. He worked as a company driver for about five years, but always with an eye towards buying a truck of his own. Those early years he operated the company truck as though it were his and carefully tracked his numbers to determine whether he could make it as an owner/operator.

“To try to jump in with no knowledge of what you’re doing, I don’t think you can make it,” Sutherland said. “The problem with a lot of guys is that they see that first big paycheque and they end up buying fancy cars, motorbikes, holidays. That money has got to be saved for the truck. The truck comes first. You’ve got to be able to maintain it. You blow a tire on the road – we blew a tire outside Dryden, Ont. on a Sunday morning. The guy wanted $1,463 for one drive tire. That’s a lot of money when it should only be $500. So you better have some money behind you.”

Sutherland tracked his figures carefully and when the truck was in the shop, he’d ask the mechanics what it cost to do certain maintenance and repairs.

“I kept track of my miles, my hours, my drops, my picks, the fuel,” Sutherland explained. “I kept a running tab of the cost of the fuel and the repairs on the truck, even though it was a company truck. It was a great experience to learn that way.”

With nearly five years as a company driver in the books, Sutherland decided to take the plunge and buy his own truck.

“We started with an older truck, something we could put down a good chunk of money on,” he said. “I kept the dollar value down so I could make sure I made some money so that I could pay repair bills if they came along and to be able to put money on the table for the family and kids at home.”

Those early years on the road running long-haul across North America were invigorating, yet being away from home was also difficult. Sutherland was married to his wife Cindy and they had two children, Matthew and Cheryl.

“I’d be gone for three weeks at a time,” Sutherland recalled. “Back then, we didn’t have the use of a cell phone so it was running into a phone booth and contact was pretty limited sometimes.” 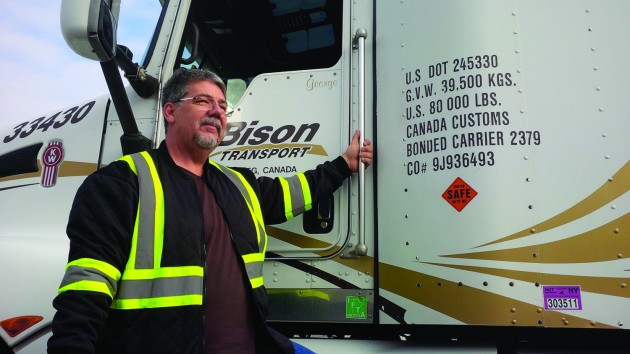 Sutherland leased on with Bison Transport in 2006, and around that time was looking to improve the quality of time spent with his family. Bison allowed him to train his wife Cindy to drive and the two drove team for a while. A short while.

“It was interesting,” Sutherland said of driving with his wife. “She went to driving school and got her licence and then she came into the truck for about three months and told me everything I did wrong, so I learned a lot from her. Then she got behind the wheel and I got to explain a few things to her. It was a great two years, but it’s over. I don’t think she wants to come back again and I really enjoy my quiet time now.”

While both George and Cindy joke about their time together on the road as being trying at times, they’re very much committed to each other, their family and their business. The Sutherlands are a close-knit family despite George’s time on the road and away from home. When he received his award, son Matt gave a heartfelt speech that attested to his admiration for his father, who he claims instilled in him his values and work ethic.

Still, the time on the road had taken its toll. Sutherland longed for a more consistent schedule and he found it recently in a local job with Bison, delivering freight to customers within the Greater Toronto Area. The new job pays him an hourly rate for all his work and he enjoys the ability to get out of the truck more frequently throughout the day and to interact more with customers.

“I wanted to have more of a schedule,” Sutherland said of the change. “I wanted to know when I was going to work and when I was coming home at the end of the week. I also like getting out of the truck and meeting people. I was finding with the long-haul that you’re stuck behind that wheel every day of the week; you’re not getting out as much as you should.”

Running local also allows Sutherland to be more productive throughout his driving shifts, taking advantage of dock delays to do paperwork or maintenance.

“I do a lot of my business planning when I’m sitting at a customer’s dock,” he said. “You might as well use valuable time. I’ve been known to throw on a set of coveralls and go underneath the truck and do a grease job at a dock.”

The local gig also allows him to get in a little more exercise, which has become important to Sutherland in recent years. He recognized years ago that his health was failing and he needed to make some changes. He was on three blood pressure medications and extremely overweight. Bison signed on for the first Truckload Carriers Association Weight Loss Showdown and when Sutherland saw the notice on a bulletin board he decided to join Bison’s team in the competition. He dropped 170 lbs in six months and was able to discontinue all his blood pressure medication. The results came from eating healthier and doing laps around his tractor-trailer.

“That was at the time when my wife was in the truck, so it was much easier when she was with me,” he said. “We quit eating in restaurants. We made wise choices. We had a coach that would call us once a week and try to keep us in line – immeasurable help. Bison, as a company, was supporting us. Every time you get out of the truck you do your circle check around the truck. I would usually do 11-15 laps. One tire this trip, second tire the next trip and just keep going.”

Sutherland admits he has since regained about 70 lbs of the weight he lost but he has joined the NAL Insurance Healthy Trucker program through Bison and lost another 10 lbs and is back on track. He said he’s encouraged and motivated by the attention driver health and wellness has received in recent months.

“These companies are starting to care,” Sutherland said. “They’re starting to figure out that drivers are not just numbers – we’re human beings – and they’re worried about our welfare.”

While driving locally affords Sutherland the opportunity to get more exercise, dealing with Toronto traffic can’t be good for the blood pressure, can it?

“You have to have a different mindset,” Sutherland acknowledged. “You don’t try and push yourself through the traffic, you just kind of go with the flow of traffic or a little slower. A slow and steady pace will get you farther down the road than trying to be fast and pushy.”

He also finds the local job is easier on his truck. He’s now putting on about 1,000 miles a week compared to the 3,000-3,200 he was racking up when running linehaul. Sutherland’s 2009 Kenworth is getting a little long in the tooth but he hopes to baby it for a few more years.

New tractors are more expensive than ever, largely due to the emissions-reducing systems that have been put in place over the past decade. Asked if it’s even viable for an owner/operator to buy a new tractor today, Sutherland said yes, but it has to be earned.

“As a beginning driver, you have to look at the used market first,” he said. “Then pay off that first truck and then get into your second truck, which is probably a little bit newer, and get it paid off. Then put some money aside, so you’ve got your truck to trade in plus you’ve got some money. I think you can still as an owner/operator get into a new truck but you’re not going to do it on your first or second or third go-round. My first new one was my fifth truck. Get some money put away. Remember that the truck comes first. Without the truck, you’re not going to have a paycheque.”

Sutherland is a current Ontario Trucking Association Road Knight, a role that sees him going out into the community to raise awareness about the trucking industry and careers within it. It’s a role he relishes.

“Schools are the greatest things,” he said. “It’s amazing how many kids want to get inside the trailer. They don’t realize how big this thing is. We get schoolteachers up there, vice-principals and principals. It opens their eyes.”

Asked what would attract more drivers to the industry, Sutherland doesn’t hesitate. “More money,” he said. “I think that’s one of the key issues. Flexibility of home time and having a company that’s honest.”

As for himself, Sutherland hopes to continue driving for about five more years before calling it a career. As Owner/Operator of the Year, Sutherland won $6,000 cash, a diamond ring, an evening in Toronto with his family and several prizes from the award’s sponsors, Castrol, Goodyear and Mack Trucks. Visit Trucknews.com to watch video interviews with Sutherland in the upcoming weeks.