BLOOMINGTON, Ind. – Trucking conditions in the US are improving, which should boost pricing and margins for carriers through the end of next year.

That’s according to the latest FTR Trucking Conditions Index, which came in at 5.47 in September, a slight retreat from August levels but reflecting an overall positive trend for carriers. The reading reflects a modest tightening in capacity, FTR reports. It is forecasting trucking conditions to peak in late 2017 or early 2018, as additional regulations that could reduce capacity take effect.

“The presidential election results have created some uncertainty in the market, mainly due to the lack of political and legislative experience from president-elect Donald Trump,” said Jonathan Starks, chief operating officer with FTR. “There are certainly several areas where the new administration could make an impact on the marketplace – with regulations being the chief area of presidential power in that regard. We will learn more in the upcoming weeks and months as the administration’s team is finalized and the legislative and regulatory agenda is cemented. I wouldn’t look for any significant impacts to the US economy until relatively late in 2017. The US economy should continue to grow – and trucking will grow slowly with it.” 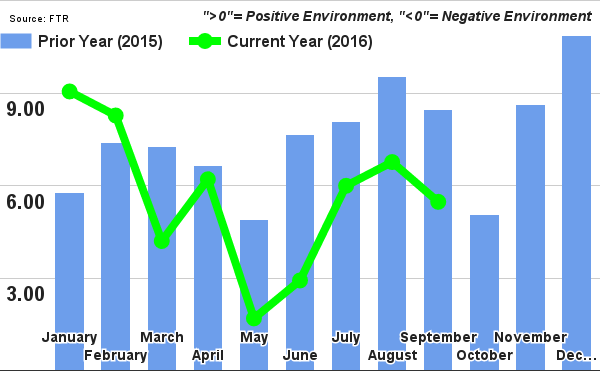