RACINE, Wis. – Concrete waits for no one they say, which makes support and good partnerships that much more important.

Mack Trucks today announced its support network is getting stronger with the introduction of Dynamic Maintenance and Mack Analytics.

Both are aimed at increasing uptime for its customers, with Dynamic Maintenance interpreting telematics data to provide enhanced planning when it comes to potential maintenance needs.

Roy Horton, director of product strategy for Mack, said the Dynamic Maintenance feature, which is available to customers for a fee through their dealer network, focuses on data from its GuardDog Connect software and is yet another step toward improved predictive maintenance. This means issues are solved proactively prior to a truck needing to be pulled from a job due to failure.

“It’s very powerful and helps contribute to our customers’ bottom line,” Horton said of Mack Analytics, which can provide insight into a customer’s fleet to compare its performance to another fleet with similar operations and specifications to help increase maintenance efficiencies.

“Enhancing maintenance planning utilizing existing vehicle telematics and data analytics is yet another way in which we accomplish this,” said Pardue. “Vehicle technology and data provide us the capability to ‘customize’ planning so that it’s specific to a vehicle and its operation. This enables customers to optimize planned downtime.”

Dynamic Maintenance expands on Mack’s partnership with Noregon, an Internet of Things company, by utilizing Noregon’s platform to enhance the dealer user interface, bringing the decision-making process closer to the customer through the dealer.

Putzmeister, which provides equipment for a variety of applications, primarily for the concrete pump truck market, has been marrying its pumps with Mack trucks for some time.

Jonathan Dawley, president of Putzmeister America, said the chassis relationship between a concrete pump and truck is paramount, and his company has long found Mack trucks to be a perfect fit.

Dawley also touted the level of support Mack offers its customers. Whether it be through predictive maintenance applications such as GuardDog Connect, Dynamic Maintenance, Mack Analytics, or a direct support hotline, Mack aims to be there for its customers.

Dawley said with the move toward urbanization, the need for concrete pump trucks is high in cities like Toronto, Ont., and those in Northern California, with the construction of high-rise buildings. This has resulted in an uptick in demand for Putzmeister’s MX model pumper, which is used for these types of projects.

He added due to a trend that has seen many fleets getting younger and at full capacity, sales have slowed recently. However, with continued demand in the concrete sector, several upstarts have entered the market and are purchasing used, refurbished pump trucks, creating new business for Putzmeister.

Putzmeister also offers telebelt trucks, which use a conveyor system to move items like large rocks, sand, and even concrete at building sites.

Dawley said maintenance on pump trucks can be costly, with components and boom tips being susceptible to damage. Telebelts, on the other hand, are comparatively cheaper to maintain and can be an option for several applications, including hydraulic fracturing operations like those in Western Canada.

“As long as you’re keeping it clean, you have a fairly maintenance-free machine,” Dawley said of telebelts.

Tom Inglese, general manager of Pioneer Concrete Pumping, agreed there are several challenges in the world of concrete pump trucks.

“Concrete doesn’t wait on anybody,” he said, adding how dealing with a perishable product, along with ever-changing regulations, and finding quality operators pose hurdles to the industry.

Inglese said Mack has supplied a reliable product, and coupled with capable dealers and the synergy between its trucks and Putzmeister’s pumps, the end result works.

“We like the standardized on the Macks…they just seem to fit the Putzmeister product really well,” he said. “It’s a good combination.”

Media was given a tour of the Racine facility, including a peek into the process of mounting a concrete pump to a Mack chassis.

The company’s goal is to complete one unit every day. With seven stations performing various steps to marry the two products, it takes about seven days to complete the process, which emphasizes the importance for Mack and Putzmeister’s engineering to mesh so seamlessly.

Two of the concrete pump trucks on display during the tour are headed to Quebec. One was the largest unit Putzmeister produces – an eight axle, 63-meter pump truck, weighing 128,900 lbs. 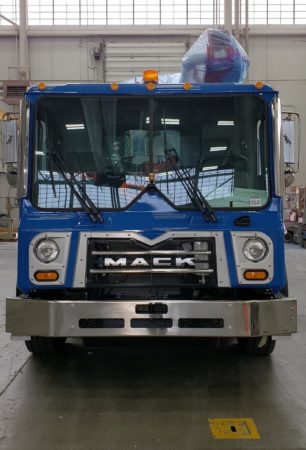 Putzmeister manufactures boom pumps ranging in length from 20 to 63 meters.

Of the approximate 250 pump trucks Putzmeister produces each year, around 30 are destined for Canadian customers.

A big part of the partnership between Mack and Putzmeister is their collaboration with Kriete Truck Centers.

A Mack Trucks dealer, Kriete invested $6 million into a new building at its Racine location, which doubled the number of service bays and warehouse capacity.

“Kriete Truck Centers is an outstanding example of how Mack dealers continue to invest in the brand,” said Jonathan Randall, Mack Trucks senior vice-president of North American sales and marketing. “The new expansion enables Kriete Truck Centers to better serve their customers, providing the high level of support truck owners come to expect from a Mack dealer and a Mack Certified Uptime Dealer.”

“It’s one of Kriete Truck Centers’ core missions to be the very best steward of the Mack Trucks brand,” said David Kriete, president and CEO of Kriete Truck Centers. “This expansion provides a state-of-the-art facility to better serve Kriete and Mack network customers, and to keep them on the road and help their businesses remain successful.”