INDIANAPOLIS, Ind. – Just 200 trailers with solar panels on their roofs would generate enough power to supply 3,200 residential homes if that power were fed back into the grid.

Jeff Kauffman of Tahoe Ventures, speaking at the FTR Transportation Conference, said it’s time for the trucking industry to think of how solar power can be used to reduce costs – beyond just powering truck accessories. Those 200 trailers could also supply enough power to run virtually any warehouse or crossdock operation, he added.

“There are lots of opportunities we in freight don’t think about,” he said. “Solar’s got a place, maybe in ways we don’t normally think about.” 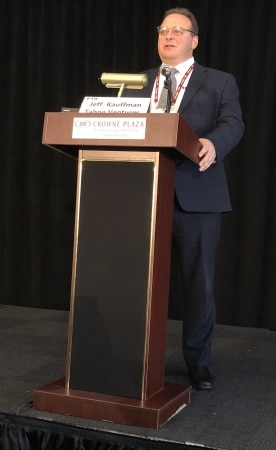 Battery costs continue to decline, and Kauffman said fleets utilizing solar are achieving a payback in one to two years, not taking into account any credits they earn.

But how much solar is necessary to achieve those savings? Kauffman said 65-watt panels (3×1.5 ft.) can generate 250-400 watts per day, enough to reduce parasitic hotel loads and run telematics at an acquisition cost of less than $600.

A 300-watt panel, which fits on the roof fairing of a Class 8 truck, can power the liftgate, extend non-idle HVAC time by three to four hours; maintain the truck batteries’ charge; and reduce battery failures during rest periods.

Going all the way up to 5,600 watts of solar panels – equipping an entire 53-ft. trailer’s roof – will enable an operator to power the TRU, eliminate idling, and return power to the grid on non-use days.