NEW CARLISLE, Ind. – Navistar’s super-cool SuperTruck actually changes shape as it reaches highway speeds, lowering the front axle up to two inches and the trailer axles by as much as three, giving the tractor-trailer an airfoil shape.

The company demonstrated its SuperTruck this week at its sprawling test track in New Carlisle, Ind. Dean Opperman, chief engineer for SuperTruck and advanced technologies, said the design of the Department of Energy-funded experiment actually began with the trailer.

“We designed this vehicle from the back forward,” he explained. “There’s a fundamental aerodynamic principle that you get to a point in designing the front edge of something that you can’t make any advancements in it, so you clean up the back.”

The trailer was dressed up in skirts that extend all the way to the rear and a bogey treatment that directs air around the axles. The side skirts meet up with a redesigned trailer tail, which is longer and taller than those on the road today.

A ball-and-socket gap treatment closes the trailer gap but still allows full articulation. Mirrors have been replaced with tiny cameras that display multiple views on mirror-shaped displays mounted inside the cab. Additional cameras provide a view of the blindside at the front right corner of the truck.

“It allows the driver to make the best use of the real estate to the right when turning left and when turning corners. It really helps let me know where I am with respect to curbs,” Opperman explained.

But the highlight is the ride height control system, which kicks in at 50 mph.

“What it’s going to do is change the pitch of the vehicle to resemble that of an airfoil, which is the best aerodynamic shape you can have,” Opperman explained. The transformation is not noticeable from inside the truck but an engineer displayed the lowering of the front and trailer axles on a laptop inside the cab. Only the tag axle permanently maintains its position.

The truck cruised a three-mile oval at 1,000 rpm at 60 mph thanks to the tall rear axle ratio of 1.91. The truck is powered by a Navistar N13 engine, aided by an electric hybrid system that also contributes power. The diesel engine produced just 60 hp to move the truck along the track at 60 mph.

Kinetic energy is recovered during braking and used to power the electric motor, as well as an additional pneumatic motor.

When the truck slows to 30 mph, it resumes its original ride height for operation in the city. When it stops, the engine automatically shuts off – but unlike engine stop/start systems found on passenger cars today, it continues to provide heating and cooling, courtesy the electric motor. At low speeds, weight is shifted to the drive axle for improved traction.

The electric system provides cooling when the truck is parked, not only at stop signs and red lights, but for longer periods such as when fueling or stopping for lunch. Opperman said apps are being developed, which will allow the driver to set the climate control before arriving at the truck. Additional power is derived from solar panels on the roof of the trailer.

The SuperTruck project was funded by the US DoE with an expectation of a 50% improvement in freight efficiency compared to a 2009 baseline. Navistar blew the target away, achieving a 104% improvement and hitting 13 mpg. The truck has been dubbed the CatalIST, with IST representing International SuperTruck. Navistar and other OEMs have been promised a second round of funding to discover what else is possible through a SuperTruck II project.

Navistar also demonstrated its ability to operate truck platoons, with following vehicles driven autonomously. International has been working with Texas A&M to develop and test the system. I rode along in the second truck in a two-truck platoon and watched as the driver joined the platoon and then removed his hands and feet from the steering wheel and pedals.

The truck followed the one in front as close as 15 meters and steered itself in accordance with the movements of the lead truck. Navistar engineers demonstrated lane changes, but no, the following truck doesn’t activate its own signal light. Most of the driving, however, was done hands-free.

A recent report from the National Council for Freight Efficiency found two-truck platoons can reduce fuel consumption by 4% averaged across the two vehicles.

“There are a lot of issues with making that practical in the real world,” he acknowledged. “We are in that game on the technologies that are going to lead to some kind of autonomous (driving).” 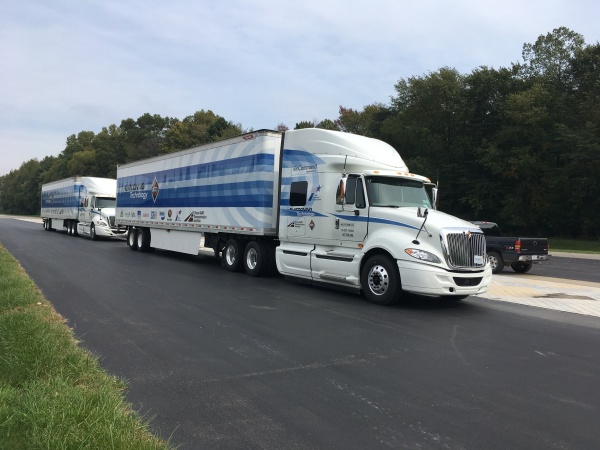