SCOTTSDALE, Ariz. – A thousand horsepower per drive axle, 2,000 lb.-ft. of torque and only 15 minutes to fully fuel an 80-kg hydrogen tank were among the technical highlights touted by Nikola Motor Company as it showcased its line of Class 8 semis at its first-ever Nikola World event here April 16-17.

That can give the company up to 700 miles of range with a total cost of operation that will rival or beat diesel, the company claimed.

The truck was designed from a blank sheet, which Nikola CEO Trevor Milton said was an advantage.

“It all came down to styling, aerodynamics, and efficiency. That was the center focus for this truck when we built it from the ground up. How do we build a truck unlike anything that’s ever been built?” Milton said in front of about 2,000 Nikola World attendees. “We built this thing from the ground up to be different.”

But while it’s one thing to build a truck that looks different, it must also perform as well or better than diesel trucks do today, Milton acknowledged. 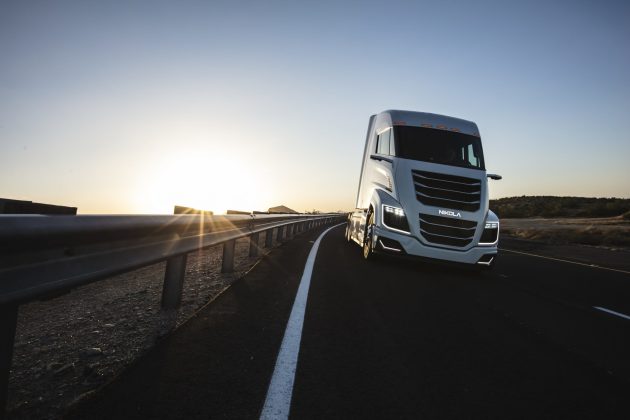 “We had to have something that’s high-performance as well. And on top of that, if you don’t have a low enough total cost of ownership, nobody is going to buy it. You almost have to beat diesel in every category,” Milton said. And that, he added, is what Nikola is doing. Traditionally, zero-emissions trucks have failed to gain acceptance because they were too expensive, lacked power, and couldn’t be worked on by existing maintenance staff.

“The hardest part is building something you can actually service afterwards,” said Milton. The company addressed that by partnering with Ryder to supply maintenance across North America.

On why Nikola is producing both a hydrogen-electric and a fully-electric version of its semis, Milton said it comes down to storage capacity. The 80-kg hydrogen tank can store more than 3,000 kWh of energy, while adding only 160 lbs to the vehicle. It would take 30,000 lbs of batteries to equal that, Milton said, and that’s why the Nikola can get a range of up to 700 miles, making it viable on longhaul routes. By contrast, the fully-electric Tesla Semi has a third of the energy storage capabilities of the Nikola hydrogen-electric truck, Milton claimed.

A neat feature on the Nikola – and one it has had to fight for vigorously against patent infringement – is its mid-cab entry door, which is located behind the driver’s seat. That driver seat was moved four feet forward compared to a traditional diesel, since there is no longer a diesel housed in front of the driver. This has also given Nikola the opportunity to improve aerodynamics with an aggressively sloped hood. The driver’s forward seat position also enhances visibility.

Jason Roycht, vice-president of Bosch Commercial Vehicles, said his company has worked closely with Nikola on integrating technologies, including cameras that replace mirrors.

“We like this for aerodynamic benefits. We also like it for enhanced safety,” he said, noting the cameras can eliminate sunlight reflection and show the driver exactly what they need to see at any given time.

For example, the driver will get a different view when the truck is in reverse than when it’s headed down the highway. And cameras can alert the driver to a car that’s coming up on its rear at high speed – something they otherwise may not see until too late.

“Current mirrors have no logic behind them,” said Milton, noting the addition of color can help drivers more quickly process what they’re seeing.

The entire interior is digital, with a 21-inch 4K display infotainment system and a 13-inch instrument cluster. Voice-activated commands allow the driver to adjust settings without taking his or her hands off the wheel. For instance, they can verbally instruct the truck to adjust the climate control on either side of the cab, or to turn on seat warmers.

Nikola also aims to eliminate problems related to key management, by eliminating the keys altogether. Drivers can control the door locks using a personalized app. When the driver approaches the truck, it will recognize him or her and automatically deploy the steps and set the interior temperature. This will also enhance security, officials said, and if a driver loses their phone, they can override the security systems using a series of codes.

“They keyless entry stuff Bosch is doing pretty much makes it impossible for trucks to be stolen,” Milton said. “It prevents unauthorized access.”

Heck – the truck can even improve pet life. Milton, a dog lover, said continuous noise has a negative effect on dogs, but the silence of an electric motor won’t hurt their ears. And they can be safely left in the truck with the cab temperature set at a comfortable level; if there is a change in temperature, the driver will be notified via the app. The windshield will display the interior temperature so passers-by know the pets are comfortable.

“We had a clean sheet of paper,” he recalled. “We wanted something the industry hadn’t seen before.”

Priorities, he said, were a clean, simple profile with dynamic windows.

“From the front, I wanted a stance to the vehicle that was impactful,” he added, noting he drew inspiration from high-speed bullet trains in Europe and Asia. The wheelbase measures 210 inches, but designers hope to get that down to 190 inches before entering production in 2022. The Nikola Two day cab boasts a tremendous amount of space behind the driver, since the driver’s seat has been pushed forward by four feet. Nikola plans to install an office environment back there. Its weight rivals that of traditional diesel day cabs today.

Interior materials are high-end leather and suede. In fact, Nikola made visitors put on plastic gloves before entering the cab, so the high traffic wouldn’t harm the finish. It’s the first time this truck writer has been asked to wear gloves before stepping into a truck.

“The fit and finish is what you’d expect from a high-end automobile,” Milton said.

He added the luxurious design could help attract more drivers to the industry, including women, who will be comforted by the safety features.

The rear fenders look like they were borrowed from a Lambo, but Milton said they’re also functional, reducing drag for improved fuel economy. The headlights are also sleek; Jennes said he issued the challenge to his staff to find the thinnest, brightest headlamps anywhere. The truck was demonstrated on a short track, but test drive evaluations have not yet been permitted. Nikola plans to build more prototypes and to get them into field testing well before the commercial launch in 2022.

But what about the fuel?

That conundrum doesn’t exist when it comes to hydrogen, Nikola officials claimed, since the company controls the roll-out of both the hydrogen-electric trucks it’s producing and the fueling network that will keep them going.

“We are talking about bringing simultaneously, a fuel cell Class 8 truck and hydrogen stations to market at the same time starting in 2022,” said Jesse Schneider, executive vice-president, hydrogen and fuel cell technology with Nikola.

The company has partnered with Nel to build the fueling stations and produce the hydrogen that’s needed on-site. It’s aiming to fill trucks in 10-15 minutes. Its first hydrogen station is already up and running near Nikola’s Arizona headquarters, and it plans to build 10 eight-ton-per-day sites in the near future. By the time the Nikola semi goes into production in 2022, the company claims it will have some 700 fueling stations operational in the U.S. and Canada.

The Arizona station in use by Nikola today can store just one ton, but is already one of the largest gaseous hydrogen storage facilities in the world. Solar panels will be mounted on the dispensers and the facility roofs, to produce fully renewable hydrogen. Nel supplies the electrolysis equipment to split the water from the hydrogen.

Most stations, which will be located near truck depots, will have a capacity of eight tons per day. The retail price will be about $6 per kilogram – about half of what most hydrogen customers around the world currently pay, Lokke said.

The first eight-ton station will be built soon at an undisclosed California location with a test fleet nearby.