LAS VEGAS, Nev. — After a flashy prime time introduction of its Inspiration Truck atop the Hoover Dam, Freightliner today offered further details on how the world’s first road-legal autonomous truck works, and how it will benefit the North American trucking industry.

Martin Daum, president and CEO of Daimler Trucks North America (DTNA) stressed it was customers that drove Freightliner to develop a truck that will help improve safety and trucking industry efficiency.

“The easy things are already invented,” he said of truck efficiency, noting it’s time now to push the envelope on innovation and to help shape future regulations as well. When it comes to autonomous trucks, it’s the regulatory obstacles that may be more difficult to overcome than any technical challenges. In Nevada, Freightliner found a like-minded government willing to help develop autonomous vehicles by putting a regulatory framework in place to allow their use. 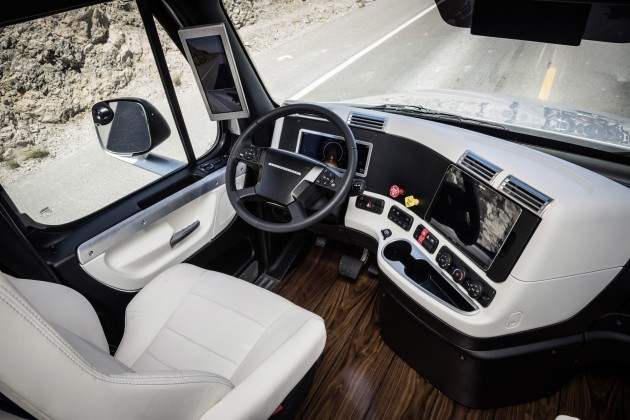 There, drivers of autonomous trucks must have a commercial driver’s licence and also take a course developed by the truck manufacturer and approved by the Nevada Department of Motor Vehicles (DMV).

“DTNA elected to debut the Inspiration Truck in Nevada, because of the fact the Nevada government has regulatory requirements for needing a licence to test autonomous vehicles on public roads in this state,” said Sean Waters, director of compliance and regulatory affairs with DTNA. “We wanted to do it in a regulatory environment that sets standards.”

Daimler conducted 10,000 miles of testing on its Inspiration Truck to satisfy the state that the technology is safe. Nevada requires a data recorder to be installed in autonomous vehicles that will store at least 30 seconds of data in the event of a crash, however Daimler captures and stores all the data generated by the vehicle over the course of its entire life, far surpassing the minimum requirement. In the event of an accident, this data will be vital in determining who – or what – was at fault.

Until other states come on-board, the Inspiration Truck can only be operated in the state of Nevada. Daum said more states and provinces must follow suit to make autonomous trucks more widely viable.

The truck can only be operated in autonomous Highway Pilot mode when it’s being driven on Nevada freeways and interstate highways. Mechanisms are in place to prevent the driver from operating in autonomous mode when and where it’s not permitted. 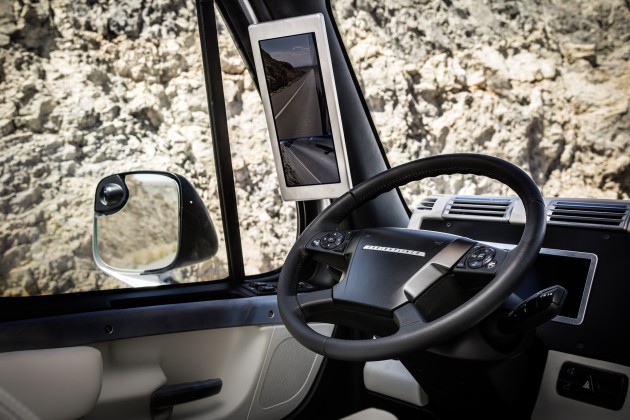 While the driver is able, under certain conditions, to relinquish control of most driving responsibilities to Highway Pilot, he must remain in the driver’s seat and must always be in position to take back control of the truck when necessary. Still, Waters said when Highway Pilot is active, the driver will eventually be able to complete paperwork, plan their next load or take care of other responsibilities, effectively allowing them to make better use of their downtime once their driving shift is completed.

A driver will always be required to oversee the operation of the truck, Daum added.

“Will it make the driver obsolete? I don’t see that,” he said. “The human brain is still the best computer. We want to give the driver a tool that enhances their capability significantly.”

The brains of the Highway Pilot system are a collection of advanced cameras, radars and sensors, integrated with the truck’s engine, transmission, braking system and electronics. The Inspiration Truck is defined by the Highway Traffic Safety Administration (NHTSA) as a Level 3 autonomous vehicle, explained Martin Zeilinger, director of advanced engineering with DTNA, meaning it “enables the driver to cede full control of safety-critical functions, including steering, in certain traffic or environmental conditions.”

There are four levels of autonomous vehicles, the fourth being a true driverless truck, but that’s not the technology Freightliner is currently developing.

“Freightliner is not interested in pursuing a full self-driving vehicle,” said Al Pearson, chief engineer, product validation for Freightliner. Zeilinger added one of the biggest myths around autonomous driving is that it is ‘driverless’ – a frequently used, but misleading description.

“An autonomous highway truck is not a driverless vehicle,” Zeilinger emphasized. “We still require a qualified truck driver with a CDL to be in the cab and at the controls.”

In fact, since the technology is so new, Nevada currently requires two people to be in the cab of an autonomous truck at all times. One can only assume that condition will be lifted in time, otherwise it would certainly offset any productivity gains the industry hopes to achieve.

While the driver will not be eliminated by the technology, there are still benefits to be had, officials pointed out. Since 90% of crashes are caused by driver error, Freightliner officials said autonomous trucks have the potential to reduce crashes. They profess the technology can also improve fuel efficiency, reduce the strain on components, improve traffic flow and reduce driver stress and fatigue in monotonous driving situations.

The Inspiration Truck also boasts platooning capabilities, where further fuel savings can be achieved by linking up several such trucks via vehicle-to-vehicle communications. They can then travel in a tightly packed convoy with the braking activities of the lead truck causing the following trucks to slow or stop in unison.

The Highway Pilot system – while impressive and far more advanced than any other such systems – still has some concerning shortcomings. It requires clearly visible lane markings to function, so it won’t be usable in snowy conditions – not likely to be an issue in Nevada – or when lane markings are difficult to discern.

Also, the camera/radar combination can’t yet identify non-metallic objects and then apply braking, so a driver who’s reading a book or making dinner reservations on his iPad when he comes upon a sizable piece of tire debris or a deer, moose or pedestrian in his path…well, that could be an issue.

However, it seems a fix to this is already in the works. Zeilinger noted as the system is further developed, it will eventually be able to recognize non-metallic objects through technology he referred to as “sensor fusion” – the combining of camera and radar capabilities to recognize a wider variety of objects. Since it’s not yet clear when the Inspiration Truck will be production-ready, this will likely have been sorted by then.

With the technical sessions complete, it was time to climb inside the Inspiration Truck for a journey on Nevada highways. The tractor-trailer was buffeted by powerful, gusty crosswinds, which put the Highway Pilot system to the test. At one time, the system did ask the driver to take control but we were never at risk.

The driver obliged and after a few seconds placed it back into Highway Pilot mode. The truck held its course remarkably well while driven autonomously. The route was pre-programmed into the GPS so when we approached the intended highway exit the system reminded the driver to take the reins. While on Highway Pilot, the driver was able to remove a tablet from the dash to perform non-driving tasks. During our drive, the truck always felt completely safe and in control, even when the driver’s feet were planted firmly on the floor and his hands were off the steering wheel.

Highway Pilot will eventually be able to use sign recognition abilities to maintain the posted speed limit but for now, the driver programs in the desired cruise speed. The truck adjusted its speed as required to maintain a safe following distance. It was able to effortlessly handle any scenario that it encountered on our short drive. Daimler, so heavily invested as it is in autonomous trucking technology, is hoping regulators across North America will be equally impressed and convinced.

Once more states allow the use of autonomous trucks, DTNA’s Daum said the hope is the technology can be used to drive further productivity gains for the industry. These could come in the form of longer driver hours-of-service due to the reduced fatigue they experience when driving autonomous vehicles, or larger, longer truck and trailer combinations, which will be safer than ever to operate because of the safety benefits automation brings. 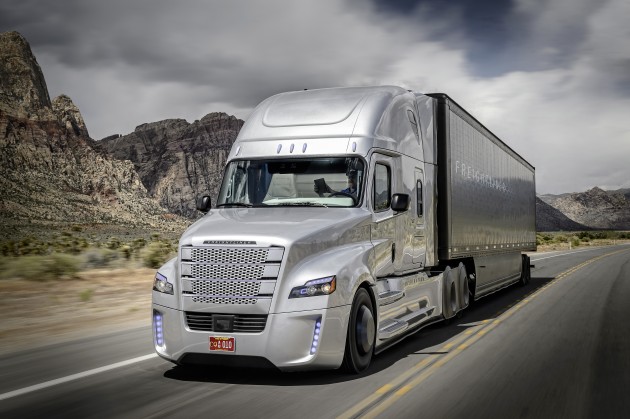