Megatrends are – by their very definition – nebulous concepts. But ZF has, by unveiling its Innovation tractor trailer – ahead of the IAA show in Hannover in September – provided a showcase that offers greater clarity in terms of the direction that trucking equipment is now headed. 2025 is the key date in ZF’s diary, with Sommer making the bold assertion that, during the lead in to that year, “We have to rethink the architecture of automobiles to have new concepts and new technologies.”

ZF’s Innovation Truck – based on a current model DAF XF105 – sees much flesh put on the bones of these megatrends. Of most immediate significance – and potentially coming to market some time around 2019-2020 – is the Evasive Maneuver Assist System (EMA), a design that builds upon exiting active braking systems by adding the ability for the vehicle to autonomously steer around an obstacle such as a stationary vehicle. 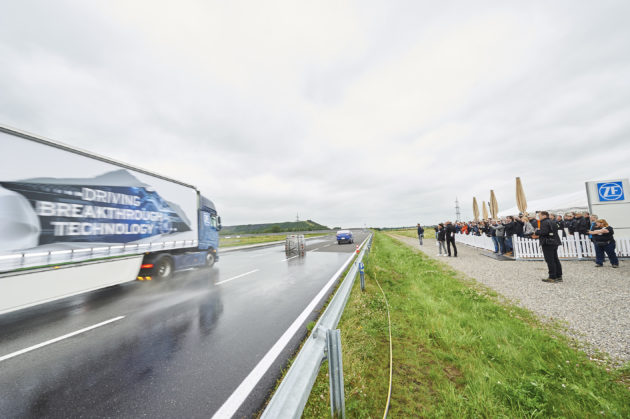 From a product perspective, EMA is an interesting development over existing active braking systems. From a broader strategic perspective it is also noteworthy, not least for the collaboration between ZF and Wabco.

EMA is based upon the combining of two different products: on the one hand, braking control is provided by Wabco’s OnGuard active braking system while the steering element is provided by ZF’s ReAX electrohydraulic steering system.

Through the use of radar sensors, the EMA system can detect a stationary vehicle and will alert the driver through a variety of warning signals. If the driver fails to pay heed to these, then the EMA system takes control of the vehicle in order to steer it around the obstacle. Should no clear escape route be available, the system simply brakes as hard as possible in order to mitigate any impact impact.

While EMA has the most immediate market relevance, ZF’s Innovation Truck also contains other technologies that are noteworthy. A remote docking feature – which allows the driver to remotely steer the vehicle back to a loading dock – may initially seem slightly frivolous; reversing a vehicle could well be seen as a core driving skill, after all. However, as the driver demographic becomes yet more of a problem, a certain amount of de-skilling within the driver population becomes almost inevitable. As a means of reducing damage claims alone the remote docking system looks to have much to say for it.

As too does the bundling of an advanced hybrid drivetrain into the Innovation Truck. Combined with a Level 3 autonomous driving system, the hybrid drive kicks in when the vehicle is operating at speeds below 30 mph – in other words in stop-start traffic conditions. As with the Evasive Maneuver Assist system, none of this is new technology, but in aggregating various different existing technologies, ZF has produced a system that does seem to have actual real world application.

Where is this all going? Concept vehicles attempt to offer a view into the future and ZF’s Innovation Truck does this with some competence. But at a broader level, this future is now rather more difficult to predict than it might have been just five years ago. In previous times, technological advance was almost universally associated with regulatory compliance. Today’s technology shifts seem rather broader in their scope.

For suppliers to the industry, this offers both opportunity and challenge. Peter Lake, a member of ZF’s Board of Management opines that: “Automated driving is real and it is here to stay in the trucking industry…this is an unprecedented period of change.” Doubtless this is the case, and, as Lake continues, it is a change that be felt right across the industry value chain.

“The theme is more intelligence to mechanical systems,” he says. “It is a case of putting the brains to the brawn.”

This implies a more collaborative approach in the future: as CEO Sommer observes: “We try to have strong partnerships with companies that have technologies we don’t have or don’t want to produce on our own. We try to combine those technologies so that, at the end, we are able to provide the overall system of intelligent or autonomous driving vehicles.”

So much for the supplier: what though of the customer? For the OEMs – who constitute ZF’s customer base – this is a period of significant change. The notion of connectivity has led the transportation equipment news agenda for much of the previous two years and yet at its heart there lies a slightly thorny issue; namely how an OEM can monetize what represents a significant investment in terms of product development.

Increasingly, the answer seems to be that it doesn’t. Connectivity offers some intrinsic benefits to the trucking fleets in terms of incremental efficiency and safety gains, but these seem unlikely to be readily amenable to much by way of an upcharge.

But what connectivity can achieve from an OEM perspective is a repositioning of the supplier-customer relationship. In its broadest sense, this is still an inherently transactional relationship. Connectivity looks set to change that, with OEMs becoming less a supplier to the trucking fleets and more a part of those same fleets’ commercial ecosystem. That potentially is a very significant change.

But one that is clearly visible and increasingly predictable. However, it is also a change that demands some repositioning in terms of thought. A truck, ultimately, functions merely to enable revenue.

A “better” truck functions to enable revenue at a reduced cost. What we see with ZF’s Innovation Truck is a broadening of what falls into the scope of “better.” It’s not as simple as once it was, and, for the end user – the trucking fleets – to allow OEMs into their ecosystem, there has to be a quantifiable benefit.

More of better, if you like. In an industry which has already optimized better in its current iteration, this is a challenge, and one that will likely lead to greater collaboration among the supplier base. The extent to which it will offer greater efficiencies to the end user will in time become clear.