Ee is the CEO of Speedee Transport, a thriving transportation company out of Burnaby, B.C., with a motto that centers on being Western Canada’s “absolute best customer service experience ever – no excuses.” 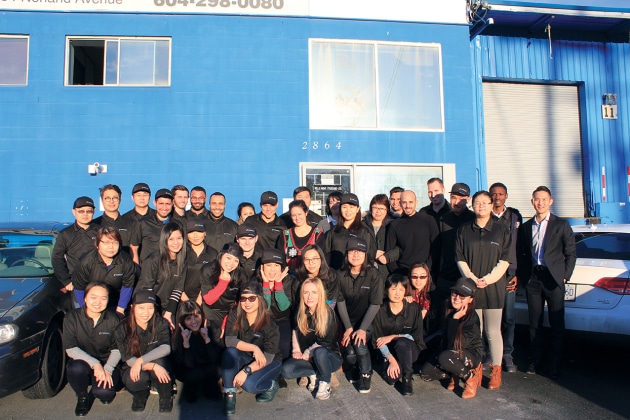 For Ee, that involves more than simply being there for its customers – it means helping all those in the industry, no matter the situation.

Driving back to Vancouver from visiting a customer in B.C.’s Okanogan Region, Ee came across a driver hauling a 53-foot tri-axle trailer who he said was tailing other vehicles and taking turns too fast.

After pulling over for some food, Ee found the truck about 10 kilometers down the highway rolled on its side. He pulled over to check on the driver. He was OK, but shaken from the incident.

“I sat with him for about a half hour talking to him to try to calm his nerves as we waited for a rescue team,” said Ee. “During our conversation, I realized he just got his Class 1 licence two weeks ago and this was his first trip to the Okanogan. I should have been shocked, but this is typical.”

Ee is not naïve. He knows people need their freight delivered, and truck drivers and carriers need to haul that freight or they will lose customers and money.
He also believes carriers need to start hiring experienced, qualified drivers. If they don’t, more incidents like the one he described will occur.

Ee’s solution to the “qualified driver shortage” is to make the process of recruiting drivers from other countries simpler, less costly, and quicker.

“We of course believe it’s best to hire local first, but when there is not enough experienced talent to fill the demand, we need to act with a sense of urgency,” said Ee.

“There are thousands of experienced drivers who are from other parts of the world who are used to winter conditions and mountain driving who would love to have an opportunity to drive in Canada. Why not open the channels up to make it easier to recruit drivers, or even better yet, provide incentives for companies to do this instead of charging the company fees for this?”

Speedee Transport is a carrier that owes its success to a driver from another country.

Speedee was established in 1976 by Eric Ee, Daryl’s father, who immigrated to Canada from Malaysia in 1969. He launched the company with one truck and one driver – himself.

Speedee was initially an arm of that original company, becoming its own division several years ago due to its rapid growth.

Today, Speedee specializes in temperature-controlled LTL and FTL services to markets in B.C., Alberta, Saskatchewan, and Seattle. They also boast over 60,000 square feet of warehouse space in Vancouver, Calgary, and Toronto.

Speedee prides itself on being a family-oriented business.

“We believe that people come to work to make a life, not just a living,” said Ee. “Everyone is important and we are always willing to help each other out. These are two of our values we share with all of our stakeholders and it’s lived out every day.”

“We’ve become more sophisticated about how we approach running the business,” said Ee. “We continually look for ways to become more effective at creating high value for our customers by providing the absolute best customer experience without any excuses.”

And when it comes to recruiting drivers from overseas, Ee knows Canada’s growing population is not looking to make excuses either.

“Canada’s economy and population continues to grow, and we will continue to be required to transport more goods,” said Ee. “With an aging driver population and a lack of fresh-blooded Canadians coming out of college or university wanting to become truck drivers, I believe it would be beneficial to move this initiative forward with speed.”

Ee said Canada has made efforts to bring more qualified drivers into the country to help ease the shortage, but more needs to be done, including ensuring that those coming over are treated fairly.

“As Canada does open up the channels further, I would suggest increasing the auditing of companies that have participated in the program to ensure drivers are being fairly compensated, have safe working conditions, and know their rights,” he said. “We wouldn’t want companies taking advantage of drivers. It really needs to be a triple win-win-win for this to work well – communities get their goods transported, people have good jobs, and companies have drivers to operate their business.”