Steady freight volumes, rising spot market prices, and more generous compensation packages from fleets may have you considering becoming an owner-operator or adding a second truck. The truck you choose will have a major impact on the success of your business, so we chatted with several used truck dealers to discuss considerations to keep top of mind when shopping for a used truck.

“I can tell you that good used trucks are becoming more difficult to find,” said Ron Duda, corporate sales manager, trucks and trailers, with Redhead Equipment. “I would suggest that – although we haven’t seen a lot of this just yet – it’s going to impact pricing. I believe we’re going to see used truck prices increase. A typical used truck that was worth $50,000 last year, I think we’re going to see it worth $55,000-$60,000 this year. They’re just getting harder to find. We’re seeing, when we have a certain type of trade coming in, they’re being pre-sold before we get them.” 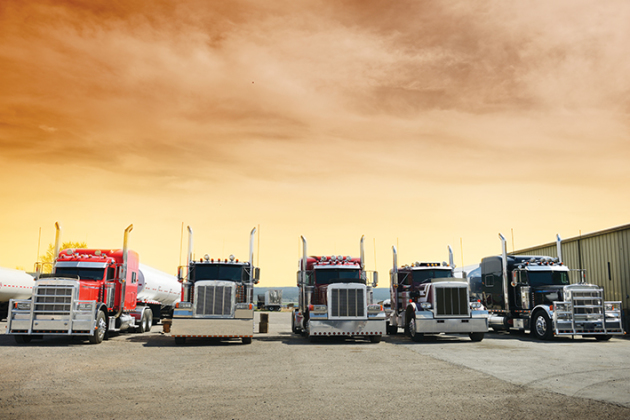 Vik Gupta, vice-president, sales and operations, with Pride Group Enterprises, agreed used truck demand has been on the rise, especially over the past three to six weeks. He noted there are more loads than trucks available on the spot market, which has helped drive used truck sales. Currently, Gupta said, “demand and supply right now are in perfect sync.”

“Highway stuff is plentiful,” he said. “The hard stuff to find, for us, is hydraulic brake straight trucks with automatics, because people tend to keep those quite a while and there’s a big demand for those in our area.”

In Western Canada, it’s vocational trucks with certain types of bodies – dump and mixer, for example – that are difficult to find, Duda added.

Spec’s that sell
Certain fleet spec’s such as automated transmissions are finally becoming accepted – and even requested – in the secondary truck market, dealers said.

“The real game-changer in used trucks, more people are looking for automated transmissions,” said Gupta. “I think that’s driven by the driver shortage and there are not as many experienced drivers left in the industry. Historically, customers have been scared getting into automatic trucks.”

Tallman’s Lee agreed. “It looks like the automatic is starting to become more acceptable,” he said. “People are coming in asking for automatics, and most fleets are going that way.”

However, owner-operators are still seeking trucks with higher horsepower than the large fleets spec’, because of the versatility it affords them to pursue different types of work.

“There’s a lot of demand for heavy spec’s with heavy axles,” said Lee.

Gupta said fleets are now spec’ing highway trucks with 425-450 hp, but owner-operators continue to look for trucks with 450-500 hp. He said buyers want the extra power so they can readily switch to new lanes or freight.

“I have always coached customers not to overbuy or underbuy,” Gupta said.

“The odd one is old-school, and he wants 600 hp and he doesn’t care about fuel economy,” Lee said. “But when you explain to them that’s where they make their money, a lot of the newer generation customers will listen to you. Our speed limit is 100 km/h, we’re restricted to 105 km/h, so big power is not getting you anywhere. It seems like people are more willing to change now.”

Also, be sure to purchase a truck that’s legal in the jurisdiction you plan to run. It may seem like obvious advice, but Duda said it’s a common mistake thanks to the proliferation of auctions and online sales.

“I see this all the time,” he warned. “Somebody would go out of their jurisdiction, buy a used truck, bring it back and realize it’s not legal and not be able to use it here. You need an understanding about the regulations in the jurisdiction you’ll be hauling. It’s a real crapshoot if you’re not talking to someone who knows the regulations.”

One fleet spec’ that has yet to catch on in the secondary truck market, is wide-base single tires.

“A lot of owner-operators don’t like super-single tires,” Lee said. “If they have a flat on duals, they can usually hobble home, or they can buy a used tire anywhere.”
While wide-base tires are becoming more widely available, Lee said used truck buyers continue to shy away from them.

What about the warranty?
Buying a truck with some leftover factory warranty is a good idea. Paying for additional warranty coverage is also worth considering. Think of it as a form of insurance, suggested Lee.

“If you buy an extended warranty, you’re not going to be shocked with a super huge bill,” he said. “It’s just like paying insurance. You can write it off – it might add an extra three or four months of payments, or $100 a month, but you’re not going to have any shock when you get a $5,000-$10,000 repair bill.”

Large fleets, Lee noted, often sell their trucks when the factory warranty expires, “because that’s how they control their costs.”

Duda said to date, “There is nobody that is presently in the used truck third-party warranty business that has contracts that are approved.”

That, however, hasn’t stopped some dealers from selling them, Duda added.

“Many used truck wholesalers and dealers are doing it, using existing contracts they had,” he said. The risk for customers is that the warranty may be useless, when it comes time to use it.

Gupta said financing the truck through the dealer offers some added flexibility.

“Banks hate trucks,” he said. “They do not really understand the business.”

Gupta said Pride Group is willing to work with customers who can’t afford a 10% down payment, if they are signed on with a good carrier and can show the potential to operate well and generate sufficient revenue. Banks generally can’t offer such flexibility, since they don’t understand the nature of the business.