Technology specialist Jan-Inge Svensson and his colleagues at Volvo’s Advanced Steering Systems in Gothenburg, Sweden, were brainstorming about making truck steering controls more driver-friendly when an idea struck them.

They had experienced the ease of steering on new passenger cars.

‘Why not try adding an electric motor to control the steering in a truck?’ Svensson and his team asked themselves.

“We knew a lot of drivers complained about pain in the shoulder and back. So, we wanted to make it easier for the drivers to steer a truck,” Svensson recalled in a conversation with Truck News. 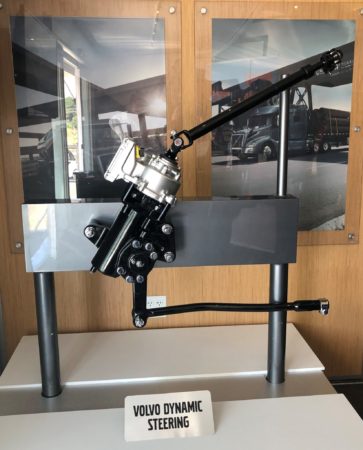 That was how the Volvo Dynamic Steering (VDS) system was born in 2008. As envisaged, it features an electric motor mounted on top of the hydraulic steering gear.

Input from multiple vehicle sensors, at over 2,000 times per second, determine the appropriate steering wheel response.

The system continuously monitors drivers’ actions, environmental factors and road conditions faster than the blink of an eye, according to Volvo.

“We built a prototype, and when people tried it, we saw that it had a lot of potential,” said Svensson.

Production started in 2013, and VDS has been in use on some Volvo trucks sold in Europe since then.

Svensson said the reaction from truckers had been extremely positive, with many saying the system had helped them get rid of back pain.

“When I hear things like that, I feel that we made something good for the truck drivers.”

Volvo Trucks North America (VTNA) plans to offer VDS as an option on trucks starting next year, the company announced at a media event in Dublin, Va., in September.

Volvo will start taking orders for VDS in the fourth quarter of this year, with production starting in April 2020, said Chris Stadler, product marketing manager at Volvo.