May 13, 2016
Truxpo session addresses affects of fatigue on truck drivers

Mike Harnett, vice-president of human factors for Six Safety Systems, spoke to a group of Truxpo attendees May 13 about how drowsiness is affecting the safety of not only truck drivers, but everyone on the road.

Harnett said that fatigue is something that accumulates, and is defined as a decreased capacity to perform mental or physical work as a result of inadequate restorative sleep.

“It builds and it builds,” Harnett said. “We cannot just will it away.”

With over 22 million people performing shift work in Canada and the US, including truck drivers, Harnett said that chronic sleep problems affect between 60% and 80% of that particular segment.

Harnett said one of the main contributing factors to fatigue is a disruption in our circadian rhythm during shift work, which helps our bodies identify when we should be asleep, when we’re hungry, and even our blood pressure and heart rate.

“The key to having a healthy life is to keep these all in harmony with each other,” Harnett said of the various factors that make up our daily circadian rhythms.

Harnett highlighted a pair of ‘danger zones’ when it comes to our daily alertness, or lack there of, one being the ‘past-lunch dip,’ which comes somewhere between 1 p.m. and 4 p.m., while the other arises between 3 a.m. and 6 a.m. and is far more precarious, as our body temperature is at its lowest, as is our productivity and awareness.

“We need to get sleep,” she said. “We are meant to do our best work during the day…we are not nocturnal and never will be.”

Sleep apnea, Harnett said, is a big issue for truck drivers, and can be prevalent in those who are overweight or have large tonsils or tongues, which restrict breathing during sleep.

Harnett said that during the past century, the amount of sleep people are getting has dropped from nine hours a night to less than seven, with several social factors contributing to the decline, including technology, work schedules and even the invention of the light bulb.

Another negative attribute of less sleep is a drop in production of melatonin, which is a natural sleep hormone synthesized and secreted at night. Melatonin is a powerful anti-oxidant that reduces in production as we age and can be restricted when exposed to light at inappropriate times, such as at night when our bodies should be sleeping.

Sleep is also the time our bodies repair themselves, Harnett said, and a lack of sleep can have a myriad of health costs on shift workers, such as a rise in cardiovascular and digestive disorders, rectal and colon cancer, diabetes, kidney disease and rheumatoid arthritis.

Harnett said our typical sleep pattern includes four REM patterns that last between 1.5 and two hours, and must include quality deep sleep, Stage 3 and 4, or delta sleep.

She added that not getting a full eight-hour sleep – losing even one hour – lowers productivity and alertness, and that chronic sleep loss leads to accelerated aging and Alzheimer’s disease.

“Only sleep can cure fatigue,” Harnett said. “Everything else is a temporary mask.

“Sleep is the most important thing in your world.”

Adding to the health discussion was Dr. Art Histor, an award-winning physician, educator and media personality, who said, “Everybody thinks they have heard it all before” when it comes to healthy living.

During his fiery and humour-filled presentation, Histor said that although life expectancy has been on the rise in Canada – 80 years for men and 84 for women – the next generation could be the first to see that trend reverse due to the onset of obesity and more rampant chronic illnesses.

“It doesn’t have to be this way,” Histor said, adding that whether a person is young or old, sick or well, it’s never too late to lead a healthier lifestyle.

“It’s not magic,” he said. “There are not beans I can sell you. Becoming more active is the single most important thing you can do.” 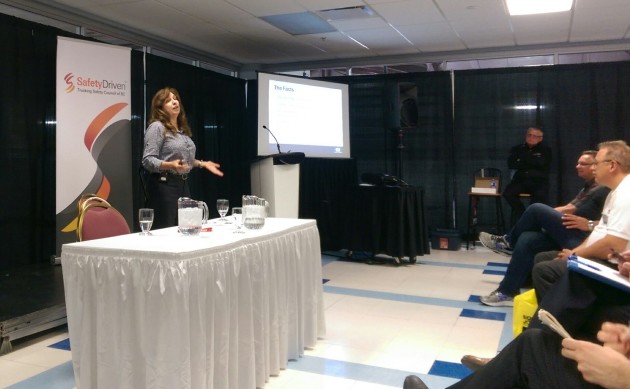