CHILLIWACK, B.C. – Peter Anthony Kampos, 38, has been charged with attempted murder in connection to the alleged March 25 shooting toward a semi-truck that occurred near Chilliwack, B.C.

RCMP are continuing their investigation into a series of vehicle shootings that took place over a 14-hour period that began at 1 p.m. March 24, which allegedly involved a blue, four-door 2009 Dodge Caliber with license plate number CAVM918.

There have been 22 reports of commercial vehicles believed to have been shot, along with one involving a passenger vehicle.

“We are asking those who may have traveled Hwy. 37 on March 24 between Kitimat and Terrace, Hwy. 16 between Terrace and Prince George, as well as Hwy. 97 from Prince George to 100 Mile House to carefully examine their vehicle for suspicious damage,” said Sgt. Annie Linteau, senior media relations officer for B.C. RCMP. “We are asking anyone who may have been the victim of a suspicious incident allegedly involving Mr. Kampos or the vehicle he was driving to contact their local detachment.”

There have been no reports of injuries as a result of the shootings. 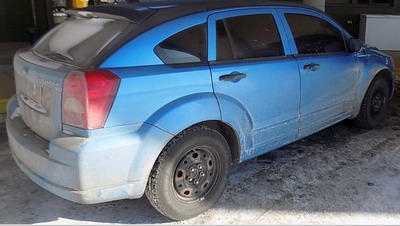 Police are searching for this vehicle allegedly connected to a series of commercial truck shootings in B.C.