DENTON, Texas — While Peterbilt’s autonomous truck commanded the most attention at its Technology Showcase last week, the company also revealed details about other technologically advanced systems it has been working on.

One of the most interesting of these was a Walmart Technology Demonstrator vehicle, which uses cameras to provide 360-degree visibility around the truck. Brent Hankins, with Peterbilt’s Advanced Concepts Group, said the truck was designed to maximize safety. 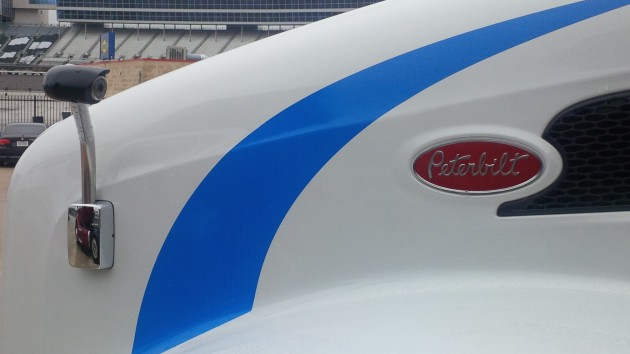 It features a four-camera system that provides a bird’s eye view of the tractor and displays it on a screen mounted inside the cab.

“There are four cameras positioned around the truck, looking at different angles, and it gives you one view that looks as if you’re 30-40 feet above the truck looking down,” he explained.

This truck has replaced hood-mounted mirrors with small cameras that provide a better view along the side of the vehicle. There’s another camera system at the rear of the truck that provides visibility of the king pin to help drivers align it properly when coupling and to ensure the king pin has been locked into place.

The display inside the cab automatically displays the most appropriate camera view (ie. a side view will be shown when turn signals are activated and the fifth wheel camera will take priority when the truck is in reverse. Most of the time, the 360-degree bird’s eye view is shown).

The truck also features a solar panel used to charge the SmartAir cab comfort system, which reduces the load on the batteries and alternator.

Also on display was Peterbilt’s SuperTruck, which achieves 10.7 mpg by incorporating a number of advanced technologies. 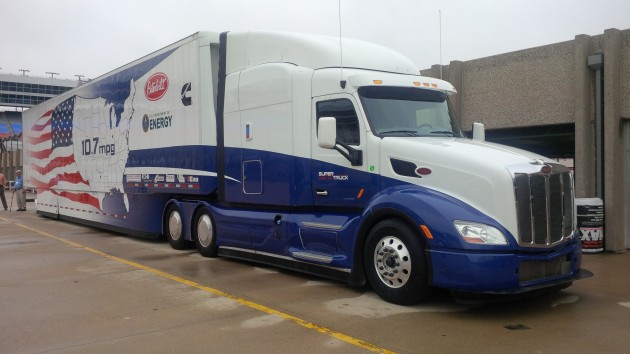 The SuperTruck inspired certain elements of the company’s current Model 579 EPIQ, including predictive cruise and some of the aerodynamic fairings.

Peterbilt’s SuperTruck looks less futuristic than the one Daimler has built, because the company chose to base it off an existing production truck – the Model 579.

“We took a production truck and turned it into a SuperTruck,” explained Darrin Siver, Peterbilt general manager.

Peterbilt also demonstrated its Driver Performance Assistant, a real-time driver coaching system that is now in production. The system monitors drivers’ use of the brakes and throttle and grades them on their coasting, braking and acceleration.

It also provides tips on fuel-efficient driving techniques, but only when the truck is stopped so as to not provide a distraction. Messages are communicated through the driver display. Fleets can use the reports to determine which drivers require additional training.

A study at Paccar’s Mount Vernon Technical Center showed drivers using the system improved their fuel efficiency by 5%, according to Peterbilt’s Matt Cullum.

Peterbilt this summer will be launching the second generation of its SmartNav infotainment system. It will feature up to 25 customizable virtual gauges and will integrate any automated camera systems installed on the truck.

Truck navigation is provided by ALK’s CoPilot. Traffic services will be available on a subscription basis and Peterbilt will now be able to provide software updates remotely so the system is always up to date.

It will also be able to accommodate third-party apps, such as electronic logging, giving customers more flexibility to expand its use. The new version will be launched in July, said Pete’s Drew Harbach.

Peterbilt also demonstrated its new remote diagnostics platform dubbed SmartLinq. It monitors approximately 800 fault codes generated by the Paccar MX engine and aftertreatment system and advises the driver or fleet manager on any actions that need to be taken – ideally before an engine de-rate or breakdown occurs.

Steven Sinclair said new Peterbilt trucks will come with the hardware installed beginning in June, as well as a free two-year data subscription – or longer, if an extended protection plan is chosen.

Fleets will be able to choose the types of warnings they wish to receive by e-mail. They can monitor their fleet at www.PaccarSolutions.com and tell at a glance which trucks have active fault codes.

The interactive map shown on the portal also displays traffic and weather conditions, giving the fleet another way to track its assets. Of course, Peterbilt dealer locations are also loaded onto it.