LAURENS, S.C. – You have to have faith in your equipment, and the engineers who designed it, to keep your foot planted firmly on the accelerator as you bear down on a stopped SUV in a Class 8 highway truck. But that’s exactly what Volvo and Bendix officials did Monday in showcasing their new Volvo Active Driver Assist (VADA) collision mitigation system, and no metal was crumpled in the demonstration.

VADA, announced in early October at the American Trucking Associations Management Conference & Exhibition, is Volvo’s fully integrated version of Bendix Wingman Fusion. Volvo’s the first truck maker to integrate the information generated by Wingman Fusion into its existing driver display, eliminating the need for a second in-cab display and the potential for distraction.

It builds on Volvo Enhanced Cruise, but offers new capabilities and the ability to mitigate front-end collisions in all traffic situations – regardless of whether or not cruise control is active. One of the most notable improvements is the ability to recognize stationary objects and automatically apply the brakes if the driver doesn’t react quickly enough.

“It’s able to detect an object and once it’s identified by the camera that it’s a vehicle, it gives the driver alarms to react accordingly. If they don’t, it will activate the brakes and brake automatically,” explained Ash Makki, product marketing manager with Volvo.

Volvo says 31% of truck crashes today involve front-end collisions. VADA’s automatic braking is available at speeds of 15 mph or higher. At slower speeds, such as in stop-and-go traffic, it will still sound alarms but automatic braking isn’t applied. In addition to issuing audible alerts, a bright red LED ring appears around the speedometer, giving the driver a visual cue if he or she is looking at their gauges instead of the road.

VADA combines a new radar, with a greater range of 500 feet forward and 22-degrees width, with a windshield-mounted camera that has a 42-degree viewing angle. This allows the system to work in all weather conditions; when it’s too foggy for the camera to pick up lane markings, the radar will take over the lane departure warning requirements. Lane departure warning comes standard with VADA and sounds audible alerts when a driver leaves his or her lane without signaling. It sounds a different set of alarms if the system notices, through erratic driving, that the driver may be tired.

Drivers have the ability to turn off lane departure warnings for 15 minutes when traveling through a construction zone or other areas where lane markings aren’t present.

Wingman Fusion also offers overspeed alerts but Volvo is not yet offering that feature. The camera reads roadside speed limit signs and alerts the driver and fleet manager when speed limits are exceeded by 10 mph or more. Volvo is still working on integrating that feature into its driver display and plans to add it in the future.

Another new benefit is the ability to prioritize alerts. If, for example, the truck is leaving its lane without signaling but also about to run into the vehicle in front, VADA will determine which of the two items is the most urgent to address and react accordingly.

The camera can be used as a driver coaching tool. When an event occurs – ie. hard-braking, fast cornering, a sudden maneuver – it captures 20 seconds of footage, the 10 immediately preceding the event and the 10 that followed. That footage is stored in Bendix’s SafetyDirect online portal. Fleet managers can monitor the performance of drivers and use the video footage for coaching.

“A lot of fleets like to use this feature to educate drivers,” said Makki. “You don’t have to wait until an accident happens.”

Drivers can also manually save footage with the press of a button if they see something on the road of note, for example if they’ve witnessed an accident. The camera can store up to 40 video files at a time. When there has not been an incident to record, the camera runs on a continuous loop, erasing footage it previously recorded. Fleet managers don’t have the ability to peek in on their drivers.

Jim Kennedy, vice-president of maintenance for McKenzie Tank Lines, a 275-truck tanker fleet based in Tallahassee, Fla. and serving the US, Canada and Mexico, is a big believer in the technology.

“VADA is there to support drivers,” he said.

“Every single vehicle that has had either one of these events – because you have a transitionary period when you’re bringing in new equipment – every one did not have on it the technology that affected that specific type of event,” Kennedy said. “That speaks volumes. That’s where we feel the proof is.”

Volvo made VEST standard in 2005, looking to eliminate the 28% of commercial vehicle accidents that involve a rollover.

After demonstrating VADA and VEST to trade press editors, Volvo brought in more than 100 dealers and customers for similar demonstrations during its Safety Symposium. It was hosted at Michelin’s sprawling 3,300-acre proving grounds near Laurens, S.C. 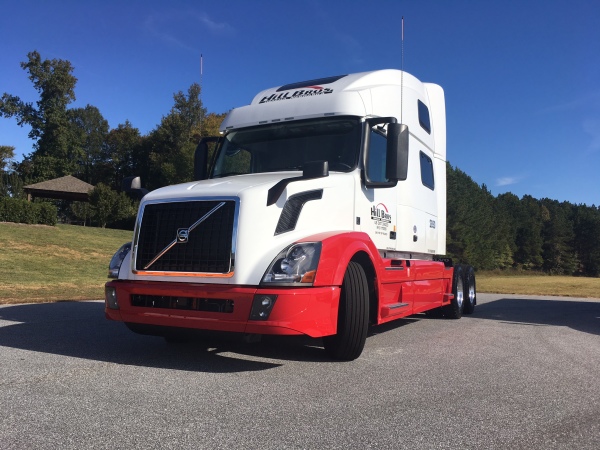