EDMONTON, Alta. – Canadian trucking software company Drivewyze will be expanding its weigh station bypass service to North Dakota, marking the first time the program will be offered in the state.

The service became active in Alberta in April, which was the company’s first in Canada.

PreClear will be available at 13 various approaches to seven fixed weigh stations, as well as eight mobile sites, for a total of 21 locations in North Dakota.

“Drivewyze PreClear now debuts offering five times as many bypass opportunities as that of an anticipated transponder-based system when it goes live,” said Brian Heath, president and CEO of Drivewyze. “Truck fleets and drivers who operate safely and within legal weight limits and meet the state’s criteria can obtain bypasses through Drivewyze.”

Heath said the company’s PreClear program is the largest bypass service in North America, and that the addition of the sites in North Dakota closes a near 400-mile service gap between Moorhead, Minn. and Wibaux, Mon.

“Drivers traveling from Chicago to Idaho now have bypass opportunities in all six states over a 2,000-mile stretch,” said Heath.

Drivers for Manitoba-based trucking company Wildwood Transport are excited about the addition of PreClear in the Peace Garden State.

Matt Holland, manager of information technology for Wildwood, said with 35 of his company’s trucks activated on PreClear, and now the addition of the service in North Dakota, it will greatly impact Wildwood’s business.

Drivers for Wildwood, who haul over 1,000 loads through North Dakota and into various states, obtain weigh station bypasses through the Drivewyze app that is preloaded on the company’s electronic logging devices (ELDs), which Holland said helps to reduce delays.

“Each time our drivers encounter a weigh station increases the chances that they will undergo an inspection that can last up to an hour,” Holland said. “With driving time being limited, once that happens, staying on schedule can be nearly impossible for our drivers.”

Drivewyze uses commercial mobile radio service (CMRS) technology to deliver weigh stations bypasses and can read weight data transmitted from WIM sensors embedded in the pavement as the truck passes over them. 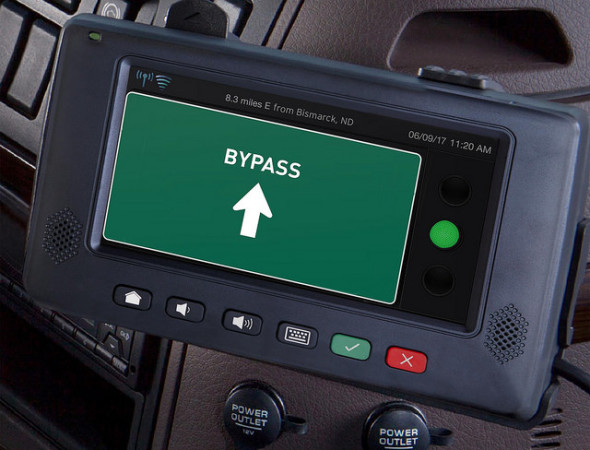