ATMORE, Alta. – A new Alberta weigh station is setting the bar when it comes to technology.

At the top of its class in Canada, you’d have to travel south of the border to find a commercial truck weigh station comparable to the Atmore location, which opened a year ago this September to the tune of $11 million.

During the Alberta Motor Transport Association’s (AMTA) driver appreciation day July 18 at the Atmore site, Commercial Vehicle Enforcement (CVE) gave Truck West a tour of the facility, showcasing how officers are able to be more efficient with the new technologies at their fingertips.

One such tool, Intelligent Imaging Systems’ (IIS) Smart Roadside, is a military-grade thermal imaging device that helps officers detect a multitude of issues on a tractor-trailer, including flat or underinflated tires, cold brakes, proper weight disbursement, and the number of axles in a vehicle combination.

The technology uses cameras to take pictures of the truck, including each wheel to depict heat signatures. A properly trained officer can then determine if something is wrong, using their time more efficiently.

In the thermal imaging, a white color indicates hot and black is cold. Chow explained how the front steer axle tires typically run hot with heat from the engine radiating onto the tire, and the fact that they are singles, not duals.
With duals, heat on the outside of the tire usually means the outer tire is flat, while heat on the rim means the inner tire is at fault. 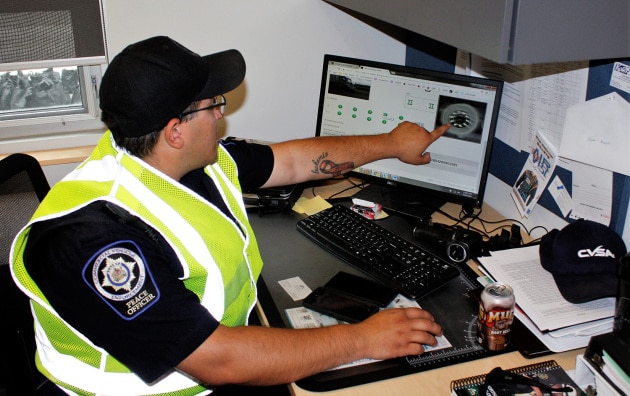 Smart Roadside also scans the vehicle’s licence plate and checks the database to see if the truck is running on an expired safety inspection or operating authority, notifying an officer if there’s an issue.

“Technology is helping us do our job,” said Dan McCormack, CVE inspector for the Northern Region. “You’ll never beat just putting an office out and putting them in an area and checking vehicles, but it’s nice to have.”

McCormack echoed Chow’s sentiment on how the use of these new technologies boosts efficiency.

“It’s pretty cool to have this technology to start watching for this,” he said. “When an officer is working the counter, it’s pretty hard to stare at every wheel. You just can’t do it.”

Brian Heath, president and CEO of IIS and its sister company, Drivewyze, said a lot of forethought went into the design, location (in the median of Hwy 63 for both north and southbound traffic), and use of the new technology.

“Alberta became the first province in Canada to adopt our advanced thermal imaging system to automatically identify high-risk and problematic commercial vehicles from the roadside without disrupting the flow of traffic,” said Heath. “It’s also the first province to use our smart transponder-based weigh station bypass service.”

Alberta fleets that are part of the Partners in Compliance (PIC) program can utilize the bypass program through the Drivewyze PreClear weigh station application.

During the month of May, 56,000 PIC members received weigh station bypasses.

Another piece of hardware at the Atmore station is a brake tester.

With disc brakes becoming the norm, it takes more than a visual inspection to tell if they are in proper working condition.

“This comes in really handy now with the disc brakes on vehicles because there’s no way we can actually check everything on those,” said Chow. “We can’t really measure pads on them, we can’t measure push rod strokes…the only way we can tell if they’re working is to throw them across (the brake tester) and this thing tells us.”

Visual checks can inspect issues like pushrod travel, a contaminated brake line, or listening for an air leak. The device can determine much more.

“It can tell us if the brakes need an adjustment, brake line is contaminated, bearings are seized up…it will pick up on stuff like that,” explained Chow. “It gives us a better idea of what the brakes are actually doing for stuff that we can’t see. It checks it mechanically and we check it visually.”

“Even if a vehicle is grossly overweight, or if the drums are worn out and there isn’t good contact,” added McCormack, “we wouldn’t see that visually laying underneath to inspect it.”

CVE officers can use the brake check technology at their discretion, but it is not something used to screen every truck passing through the Atmore station.

The brake check is housed in another new feature at the scale – a shed – which was first seen at the Balzac facility and is also in Leduc, Slave Lake, and Coutts.

The shed is convenient during inclement weather, and at the Atmore location it offers training rooms, lockers, washrooms, and a catwalk to check cargo securement at the top of the load.

“We often run into logs where they have to have so many tie-downs and so many have to be in contact with the load,” said McCormack. “We do our best to see from the counter or at roadside, but this allows you to go up top.” 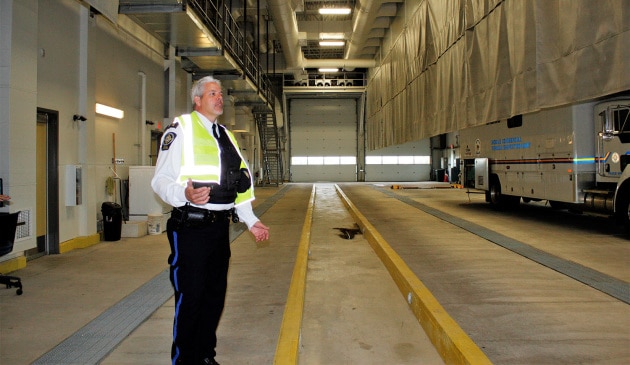 There are also drop down floors in the shed, which makes it easier for officers to get under the tractor-trailer using a roller – referred to as “the bone creeper” – which, as McCormack said, is getting lower and lower to the ground with new aerodynamics.

“A lot of this new technology wasn’t there,” he said of older model trucks. “Twenty years ago you could probably crawl under a truck on your knees, and now you can barely get under it on your back.”

CVE can go mobile, as well.

“Just a truck isn’t bad when you’re by yourself,” McCormack said, “but you put a couple of officers in there and it gets a little tight after a couple of days.”

The units are also used by the province during disaster situations, such as floods and forest fires.

“They’re useful to the province when something happens and they cash in and use them,” said McCormack, “but the rest of the time, we look after them and use them at our checks.”

Mobile inspection units are equipped with diesel or gas generators, bathrooms, a kitchen, and work stations. 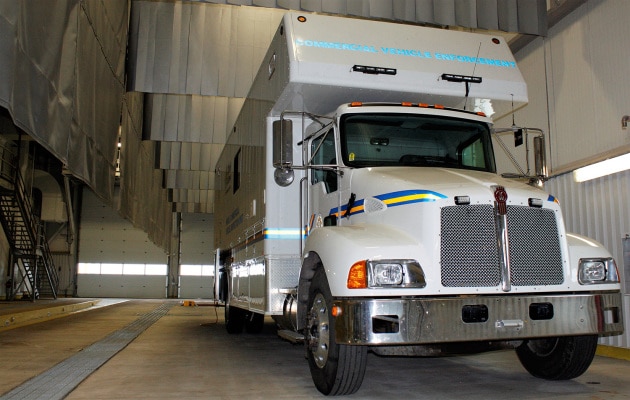 Alberta CVE operates under a mandates that identifies three key objectives: protect the infrastructure, which it does with its scales; public safety through mechanical inspections on vehicles, checking driver credentials, and patrolling for driver behavior; and the Alberta advantage to make sure it’s a fair and even playing field.

Officers are not only trained as commercial vehicle inspectors, but also for dangerous goods and invasive species.

There are approximately 140 CVE officers in Alberta, and in a perfect world, McCormack would like to see more.

“A lot of our problem is we seem to be able to hire in the hub areas – Edmonton and Calgary – but it’s sometimes very difficult to recruit up to these northern locations,” he said. “Fort McMurray is a primary example. A lot of the times you go up there, it’s like the Wild West…it’s like shooting fish in a barrel. You could be writing tickets all day, but we don’t have the manpower. We do our best.”

Though he says a good portion of carriers do a decent job, it’s that other percentage that makes it difficult to police.

“You can go on any trucking website and hear the negativity about the things we do every day, but I would like to think that’s a small portion of the industry and the credible carriers are happy to see us out there because it allows them to operate and not compete against that,” said McCormack. “If you run a reputable company, you do your job, and you’re diligent in your work, you really should have nothing to worry about.”