MONTREAL, Que. – Truck platooning technology is ready to be deployed, and legislation in the U.S. has been passed to allow it, but hurdles remain before it becomes widely adopted.

That was the conclusion of a panel discussion on truck platooning held at Michelin’s Movin’ On conference on sustainable mobility May 30. Mike Roeth, head of trucking efficiency for the North American Council for Freight Efficiency (NACFE) said the fuel savings possible from platooning – the pairing of two or more trucks at close range – are significant.

Its study into two-truck platooning found the lead truck reduced its fuel consumption by 4%, while the trailing truck improved by 10%, for an average fuel savings of about 7%. However, NACFE revised that down to about 4% when taking into account real-world challenges such as traffic and the inability to platoon at all times.

“There will be times the two trucks are finding each other, driving by themselves burning more fuel,” Roeth acknowledged.

Most of the technologies required for platooning are already available to order on trucks today in the form of active safety systems, and Roeth said about 40% of trucks built today are being spec’d with those options. A benefit of  platooning is it may bring down the costs of those safety systems due to greater economies of scale.

“A lot of the technology required to platoon two trucks is already on the truck, now we just have to figure out the Vehicle-to-Vehicle communication to make it happen,” Roeth said.

Peloton Technologies is a company that has developed a retrofit kit that provides the V2V communications required. Shad Laws, director of advanced development and product planning, said platooning shortens the reaction time when braking is necessary, since the lead truck controls the braking of the following truck. This brings reaction time down from 1.5 seconds to 30 milliseconds, Laws said. When the lead truck applies the brakes, the following truck’s brakes are applied before the lead truck even begins to slow down.

The Peloton system is able to read road conditions and adjust following conditions accordingly. The company has production programs in place with most major OEMs and is in the process of becoming ISO-certified. It plans to go into commercial operations later this year, and Laws said 17 states now allow truck platooning. Several Canadian provinces are also in discussion, he added.

For Peloton, a key is to convince drivers to embrace platooning. Peloton gets paid by fleets based on the miles the trucks run in platoon formation, so “if the driver never pushes the button, we don’t get paid.”

Bill Brentar, vice-president of maintenance and engineering for UPS, said his fleet is eager to begin platooning – even if the fuel savings are in the more conservative 4% range. But he acknowledged there are still barriers to overcome.

“Do we platoon? The answer for us is yes. But when? That’s going to depend on a lot of variables,” he said. “One of the challenges you will see is, you can’t platoon anywhere. There are only 45,000 miles available in the U.S. Where are those and how do they fit into your daily operations?”

As a mixed fleet running five or six brands, Brentar is also concerned about the compatibility of various systems on the market.

“If everyone is vertically integrate, it limits opportunities to platoon,” he said. Brentar also wants to see “platooning on the fly,” so that trucks can pair up on the highway rather than needing to be staged at the same starting and end point.

“We don’t have people matched up leaving at the same time every day,” he pointed out.

He also said there will be concerns about who to platoon with.

“I’m not sure I want to platoon with my competitor. Maybe it depends on who gets 7% and who gets 10%,” he joked. 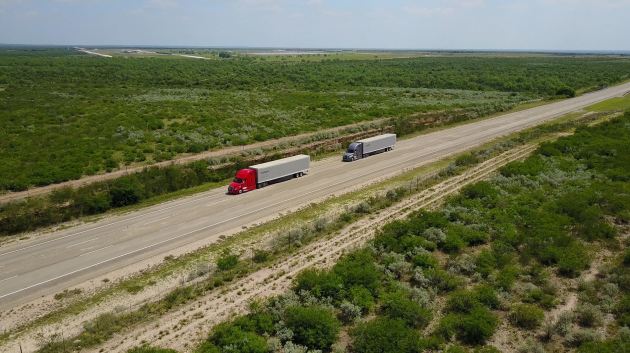