MONTREAL, Que. – Truck platooning has been successfully demonstrated on Canadian public highways for the first time.

The tests took place between Oct. 29 and Nov. 2, and were conducted by PIT Group, Transport Canada, Auburn University, and Minimax Express Transportation. Highways around Montreal, Lu Tuque, Trois-Rivieres, and Blainville, Que., were used for the demonstration.

The trucks were driven in a convoy, linked by a computer system that maintained the desired following distance between the trucks. The computer also controlled braking and acceleration, allowing the trucks to travel closely together to reduce fuel consumption. 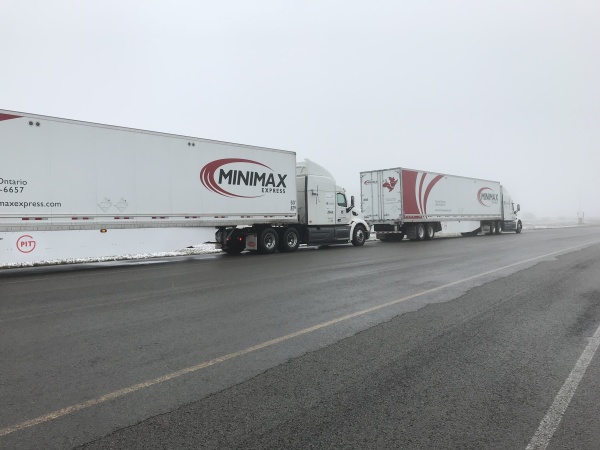 ‘’PIT Group is a leader in the testing and integration of new technologies and this test is another example of that. We’re very pleased with the preliminary results and we’re convinced they will lead to other breakthroughs in this field in the near future,” said Edouard Proust, a PIT Group engineer.

The platooning technology used was developed by Auburn University’s mechanical engineering department. A minimum following distance of 20 meters was maintained. The platoon disassembled at highway interchanges and covered a total of about 1,000 kms with regular traffic.

“We’ve driven the trucks under different weather conditions before but this was a first for us driving in a combination of rain, ice and snow,” said James Johnson, a research engineer at Auburn University. “The automated braking and acceleration worked well in the weather conditions and we’re pleased with how the trucks performed throughout the testing.”

Escort vehicles were used to ensure safety with the motoring public. The platooning system was engaged for most of the trip, Proust said.

“This is a great achievement. It’s a little soon to make a conclusion on the data that was gathered but the system reacted properly to vehicle cut-ins and to road conditions,” he noted.

PIT Group indicated eventually the following trucks may be entirely autonomous, but that eventuality is still some time away. The hope is that platooning can someday not only save fuel, but also assist with the driver shortage, or even attract younger tech-savvy individuals to the profession.

“We’ve been in business for the past 28 years and the issue of recruiting drivers has never been so real,” added Yves Poirier, president of Minimax Express Transportation. “We’ve had to refuse business opportunities due to a lack of drivers. Our industry needs to find a way to attract new workers.’’

Meanwhile on Nov. 1, the same group demonstrated the technology on forest resource roads in Southern Quebec. The day-long test used logging trailers and was conducted in Riviere-aux-Rats, Que., along resource roads between a Resolute Forest Products logging site and its sawmill 75 kms away. 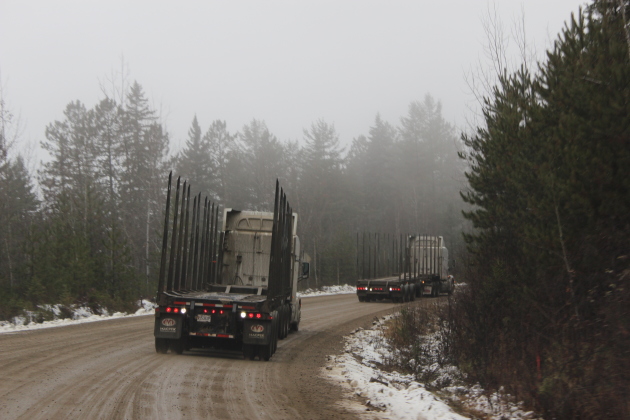 “These forestry platooning tests are an accomplishment for FPInnovations, regardless of their outcomes,” says FPInnovations lead forestry engineering scientist, Francis Charette. FPInnovations is the parent group to PIT. “To the best of our knowledge, no other company has tested platooning in a forest environment. As a respected non-profit forestry R&D organization, FPInnovations is ideally positioned to bring together specialized research organizations and commercial industries to further the common goal of introducing platooning on forest roads.”

“We’re very glad to be a part of today’s tests,” says Resolute Forest Products director of forestry operations, Jonathan Perron. “The forestry industry has to be innovative to compete globally and the concept of automated platooned trucks following one lead truck driver can help us improve our efficiency despite a labour shortage that’s affecting our industry across the country. We also believe that this type of technology will help us attract a new generation of forestry workers.”

The trucks traveled at 70 km/h at a following distance of 20 meters.