BLOOMINGTON, Ind. – FTR’s Trucking Conditions Index measure for the month of November went up more than three points to a reading of 8.64.

FTR said the reading is a potential reflection of the improvements expected for truckers in 2016, though it expects worry among shippers about tight capacity to grow in the second half of the year, which will strengthen the carrier environment.

“The market seems to be in a momentary flux as we end 2015 and prepare for 2016,” Jonathan Starks, chief operating officer at FTR, said. “The news is loaded with reports of rapidly falling oil, chaos in the foreign stock markets, and commodities markets continuing to fall. However, the December jobs report was reasonably strong and most of the U.S. economic data points to a continuation of modest growth domestically. Inventory levels do remain a concern, but if they are concentrated in the retail sector there are less drastic measures needed to get manufacturing going again. The ISM Manufacturing Index was again below the critical 50 mark, but it did not decelerate further, and a modest rebound in manufacturing is expected by mid-year. If that holds true, then the modestly tight market that has embodied truck capacity for the last year should keep pressure on rate growth to stay positive and capacity to start to tighten in late 2016, ahead of implementation of several key regulations in 2017 – with speed limiters and ELDs topping that long list. Our initial take for 2016 is to expect some more of the same – modestly tight conditions in contract segments and somewhat looser conditions for spot activity. However, with the economic data not clearly pointing to an acceleration in growth, the fleets’ position is somewhat tenuous, and the downside risks do seem to be increasing.”

Details of the November TCI are found in the January issue of FTR’s Trucking Update, published December 23, 2015. 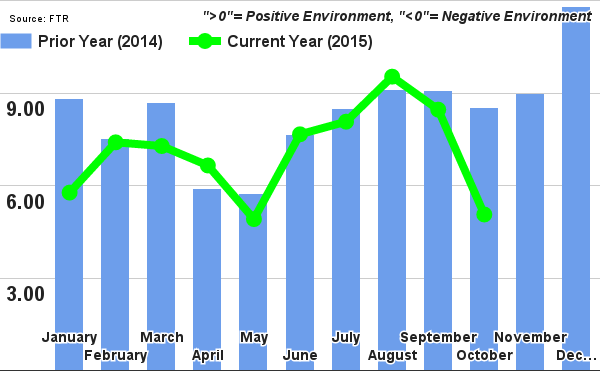