PALMDALE, Calif. — Straightline Aviation has announced a purchase agreement for 12 Lockheed Martin hybrid airships, which will reportedly be used to deliver cargo and supplies to remote mining and oilfield operations in Northern Canada.

The deal is worth US$480 million and represents the first order for the airships, built by Lockheed Martin.

Straightline is based in the United Kingdom and was set up as an owner/operator of hybrid airships.

“We are delighted to be first in line with this magnificent aircraft that is going to dramatically change the way cargo is moved around the world,” said Mike Kendrick, SLA co-founder and chief executive officer. “The clear-cut economic and environmental advantages of these hybrids are attracting vast amounts of attention from a wide-range of potential end users.”

“Lockheed Martin’s Hybrid Airship represents a revolution in remote cargo delivery,” added Rob Binns, chief executive officer of Hybrid Enterprises, Lockheed Martin’s airship reseller. “Having an experienced team such as SLA recognize the Hybrid Airship’s potential by signing the LOI solidifies the demand for this new mode of transportation. We are honoured and excited to share this milestone with them.”

The airships feature a unique, tri-lobe shape and air cushion landing system. The companies say they can be used to affordably transport cargo and passengers to even the most remote locations, with little or no ground infrastructure required. They also burn significantly less fuel than conventional aircraft.

A Canadian Press report indicated the airships are expected to be deployed in Northern Canada, among other locations, eliminating the need for ice roads and allowing the transport of diesel and other supplies 340 days a year. 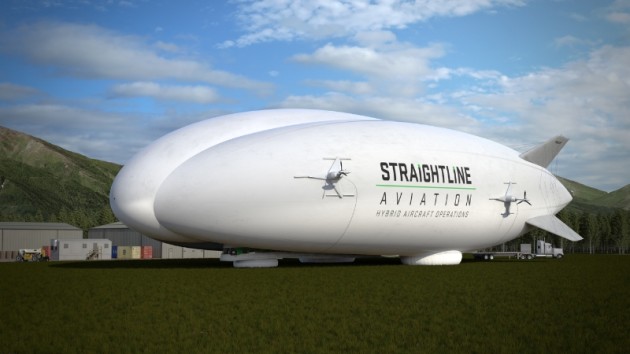 Straightline Aviation (SLA) signed a letter of intent to purchase up to 12 Lockheed Martin Hybrid Airships, which provide affordable and safe delivery of cargo and personnel to virtually anywhere – on water or land. Hybrids were designed to enable a more sustainable future. (PRNewsFoto/Lockheed Martin)