Is there a cookie-cutter day cab tractor whose spec’s fit most regional and P&D trucking applications? Yes and no. The cab and chassis might be somewhat generic, but some items can vary widely from fleet to fleet. And when it comes to straight trucks Class 7 and below, custom spec’s are the name of the game.

With the exception of couriers like UPS running single axle A-trains, single-axle tractors have all but disappeared from the industry—they’re just too limited by the amount of weight they can carry. Daycabs these days are almost always tandems, and the spec’s are pretty standard across the board: 12,000 lb. front ends and 40,000 lb. rears, what John Haines, national fleet manager for Canada Cartage, calls the “grocery truck spec’.”

His tractors are powered by 410-435 hp engines and sit on 3.70 rear ends. Most general freight carriers will order a wheelbase between 173 to 189 inches, while Haines opts for 173 inches and short-nosed Volvos and 8600 model Internationals. Shorter spreads have less chance of getting in scrapes in tight dock areas, and that’s important when you oversee a fleet of hundreds of trucks.

These Canada Cartage trucks are meant for regional work and short highway runs and peddle loads. “We don’t bother with a faring or too much aerodynamic stuff on this kind of truck. Other than a decent seat for the driver, it’s pretty basic,” says Haines. “There’s no reason to order an expensive 10-piece front bumper when a painted one works well enough.” 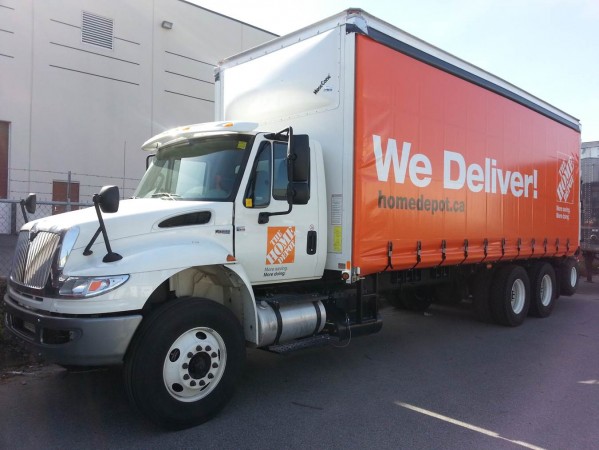 Haines spec’s all his new trucks with automated transmissions, as the move to automatics continues in the trucking sector. In a few years drivers won’t ever have to deal with three pedals. Still, 10-speed Roadrangers are the most popular shifter among the old school, while 13-speeds, and less often 18, are still favoured by a number of heavier haulers.

At least three strong arguments support the move to automated transmissions: attracting new drivers, limiting abuse, and most important of all, fuel efficiency. Kathy Salandziak, director of safety and operations for Messenger Freight Systems of St. Thomas, Ont., whose company just recently purchased a slew of ProStars, is getting great results with fuel mileage. “With the automatics our drivers are getting 10.3 miles (Imperial) per gallon, while our most experienced drivers are getting 10.1 to 10.3 with the 10-speeds.”

Salandziak ordered half the Prostars with 10 speeds and the other half with Eaton-Fuller Ultra-Shift Plus automatics, keeping both her new hires and veteran drivers happy. Most new drivers have no interest in learning on a stick shift while her older drivers eschew automatics and want the tried and true Roadrangers.

Choice of horsepower for regional trucks varies from the high 300s to around 450 and should put out anywhere from 1,450 lb./ft. to 1,650 lb./ft. of torque. But getting the rear end ratio right is just as crucial for achieving the best fuel efficiency. Messenger Freight’s new Internationals are powered by the Cummins ISX 15 litre engine for power, producing 425 hp and resting on 3.43 rear ends. While another large regional carrier goes with Navistar’s 13 litre N13 (with urea) set at 410 hp and sitting on 3.55 rears.

According to Rob Arcese, sales and lease manager for Carrier International Truck Centers of Cambridge, Ont., “It may take a few years, but every customer has a spec’ that they’ve developed that works for them.”

Rick Poser of Kitchener, Ont., has had trucks on with Parmalat since 2000. His six tractors pull heavy loads on company-owned tri-axle trailers. They make 5-10 stops daily and cover anywhere from 175,000 to 200,000 km per year.

“When I first started, we were running 2000 Sterlings with 410 CATs and 4.12 rear ends,” says Poser. “We weren’t sure what we needed for the loads.” These days Poser is working 435 hp Volvo D13s matched with 3.90 rear ends. “We learned that by dropping the rear end ratio we could improve the fuel mileage by running faster at lower rpms. So years ago we’d be running 100 kph at 1,650 rpms, and now we’re doing the same speed at 1,450 rpms. We could probably go lower, but I wouldn’t want to pull the rear end out.”

LED lights have replaced halogen and become standard from some OEMs. “More and more trucks are starting to get ordered with LED lighting (inside and out),”says Matt Ysinga, truck sales representative for Expressway Trucks of Ayr, Ont. “LED lighting tends be a lot brighter and last a lot longer than regular lights.”

Driver comfort is essential for employee retention, among other things. You’d be hard-pressed to find a day cab that wasn’t air-ride, and didn’t have a good stereo. Poser slip-seats his driver. When he orders a tractor he specifies a higher-end interior along with a premium seat. But for Poser, getting good fuel mileage is a top priority. “I also get the extended faring and fuel tank faring, aluminum wheels to keep the weight down a bit,” he says.

Straight trucks, of course, do a lot of the work for regional carriers. There’s a configuration and box-type for every transport need, whether it’s a class 3 grossing 12,000 lb. delivering baked goods, or a heavy-duty tandem straight truck with a 30 foot reefer box pulling heavy loads of frozen food. But at least there’s no debate about transmissions—automatics are di rigueur for straight trucks and you’ll probably have to go with the six-speed Allison automatic, which has been the industry standard for some time now. 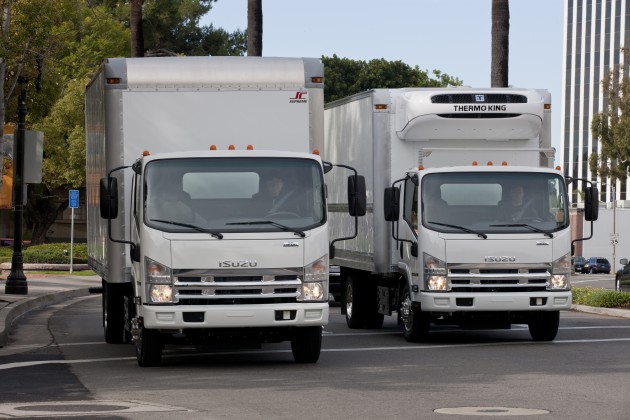 What you’re hauling and how far is important. The weight of your shipments should be paired with the right-sized engine and corresponding torque to achieve the best economy and performance. According to Arcese, a good mate for a medium duty truck might be a 250 hp engine with 550 ft./lb. of torque. Anything heavier and you could step it up to a 7 litre 300 hp engine with 660 ft./lb. of torque. Beyond that something in the 9 litre range and 335 hp might suffice.

Driver-friendliness, accessibility, visibility are all factors to consider, trumped only by customer service requirements. A courier who doesn’t do much dock work might request a low-profile vehicle that sits on smaller wheels. Most straight trucks include a split seat in the cab which is handy for service for delivery trucks or service vehicles that occasionally carry helpers. The driver’s seat remains separate so the height can be adjusted, while a bench seat is bolted alongside that can hold two passengers.

Much straight truck work is contracted to a private manufacturer or retailer and may require specialized accessories. Canada Cartage operates a home delivery service for Home Depot that includes an array of equipment including flat decks, boom trucks and curtain-siders. The company uses Class 7 straight trucks to make deliveries in Ontario and eastern Canada, but favours a tractor pulling a 36 foot pup in the western provinces.

“I hate to buy a truck off the lot but sometimes you have no choice,” says Haines. “As has happened recently, you need the truck right away and you can’t wait for them to make one for you.” In the case of his Home Depot vehicles, Haines has to decide if the truck will be equipped with a crane (in which case the front end could be strengthened to 16,000 lbs.), or if it will have a Moffet kit attached (a mobile fork-lift truck that attaches to the tail of the and requires a beefed-up frame and 40,000 lb. rear ends).

Power tailgates are an essential feature for some delivery trucks, and David Moore, owner and president of General Cartage in Etobicoke, Ont., has had some mixed experience with them. “A standard tailgate for general freight has a capacity of 3,000 lbs. But we found we were getting tailgate failures anywhere from the third to fifth year. So we went to the heavier, 3,500 lb. tailgates and seem to have avoided those problems.”

Tailgates come in basically two types, the “rail-gate” and the “tuck-away.” The rail-gate rides up and down on a railing at the rear of the truck and folds up so that it becomes part of the rear bumper. The tuckaway folds under the box or trailer and is much preferred by Haines of Canada Cartage, who specifies a 5,000 lb. capacity tailgate for his delivery vehicles.
“Rail-gates have to be repaired three times more frequently than the truck-aways,” says Haines. “And you can’t put a rail-gate on the back of a 53-foot trailer because you’d be over-length. But you can put a tuckaway on the back of a 53-footer.” 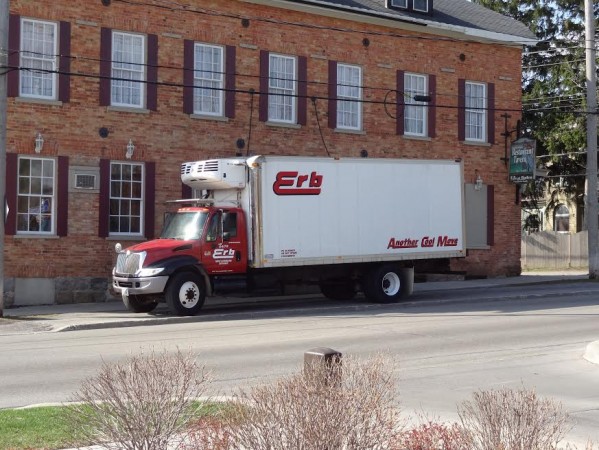 Sometimes you may not be able to spec’ for the accessories you count on the most, as Moore of General Cartage discovered. “We recently received delivery of a cabover Peterbilt 220 which is a truck primarily made for the European market. In this model the convex mirrors sit on top of the rear-view mirrors but that’s not what our drivers are used to. Some of our drivers had difficulty seeing cars in the blindspot. What happened in this case? The dealer agreed to replace the European mirrors with North American ones.

“We’re generally moving to a more generic spec’ and we usually follow the OEMs spec’ for city and regional trucks,” adds Moore. “There are some things that become chronic issues, but they’re generally small things. Looking at the roll up door, we use all stainless steel hinges which stops rust from bleeding onto the back door boards. And we request dual rollers in the track of the roll up door, which clamps them at two points rather than one. And the scuff liner. We’ve had better results with a hardwood scuff liner and that’s what we get the builder to install.”

Jim Pinder thinks that innovations are key to keeping a fleet state-of-the-art and efficient, and he’s seen a few of them included in the truck spec’s during his first two years as corporate fleet director for the Erb Group. Among them, automatic greasing systems on all tractors, soon to be extended to the straight truck fleet; LED lighting wherever possible on all trucks; and a motion-sensitive lighting system in the back of trucks and trailers so the driver doesn’t have to worry about turning a light on and off.

Recently Erb Transport started hauling flowers and Pinder talks about the challenges with this commodity. “We’ve always been a 100% climate controlled company but this was something new. But we’d recently purchased some new reefer equipment and that gave us some more options and more BTUs. That’s what our business is all about,” he says. “Adapting to a situation, and then meeting customer expectations.”