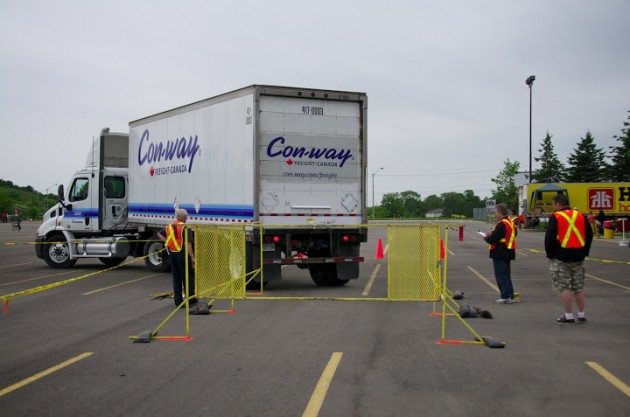 TORONTO and CAMBRIDGE — Drivers, start your engines! The Ontario Truck Driving Championships (OTDC) is just a few weeks away and though it’s not all about speed, a great deal of skill and discipline are needed to walk away with the big trophy at the end of the weekend.

For the uninitiated, the Truck Driving Championships is equivalent to the Olympics in the trucking world. The best drivers from the best fleets go head-to-head in a series of events at a regional and then (if they qualify) provincial level—ultimately going to the national championships to go up against the best in the country.

Competitors face off in three separate events at these championships: a written test consisting of 50 questions regarding the rules of the road; a pre-trip vehicle inspection where in eight minutes, while being watched by an MTO officer, they need to identify five planted defects; and negotiating a series of driving obstacles, such as backing into an alley dock with only a set number of inches of clearance.

The events are completely run by volunteers who participate out of their passion for the event. And who wouldn’t want to volunteer during a (hopefully) hot and sunny July weekend where a little friendly competition is in the air?

Like all major sports or discipline-based competition, the Truck Driving Championships have a specific set of rules all participants must adhere to in order to compete. All competitors in the championships must be full-time drivers and must be accident-free for the 12 months preceding the date of the competition. No competitor is allowed to use his or her own truck. Instead, the trucks used at the event are donated to ensure each participant is on an even playing ground.

“It could be said that maybe the person driving their own vehicle, or a vehicle identical to what they drive would have a slight advantage,” said Donald R. Danbrook, treasurer and events co-ordinator for the central Ontario regional event. “The advantage could be as simple as steering. Everybody’s got the same opportunity; they’ve never driven (these) tractors before.”

Michele Joslin, chair of the Toronto regional championships, agrees that these trucks create fairness, but she also added, “It’s a tight course. So the course needs to be set up according to the truck.”

Jim Schaefer, a company driver for Tim Hortons, who has been driving trucks professionally for more than 32 years, has been competing in the championships since 2009 and has been to all three events: regional, provincial and national. He was the first place Ontario provincial winner in the B-train category last year.

“I cannot think of one negative thing about (the championships), other than the fact that I didn’t win the nationals,” Schaefer joked.

Schaefer said his favourite aspect of the championships is how family-friendly it is. He said he and his wife made several friends at the event over the years and looks forward to seeing them every summer.

“I’ve met people from Ottawa that I only see at rodeos. It’s almost like a little gathering that everyone goes to,” he said. “It’s a family thing.”

This year’s competition marks the second year in a row for Fortigo Freight Services. Elias Demangos, president and CEO, says there is not enough publicity for the event and the benefits of the championships extends beyond a business standpoint. It allows the public to see the trucking industry differently.

“It’s an opportunity for us as an industry to bring awareness about the drivers because there are humans behind these big rigs and these humans are professionals and they take great pride in what they do,” he said.

“It’s not about just getting behind the wheel, pushing the gas and running—these events showcase just how difficult it is to be a professional truck driver. When I see some of these obstacle courses I think, ‘Heck, I couldn’t do that in a car, let alone a truck with a trailer!’”

One of the more talented drivers in the championships is Clary Ward of Con-way Freight who heard about the competition years ago from a co-worker.

“He was involved in them and talked to me and said I should come as it’s a lot of fun,” he said.

This will be Ward’s tenth year competing. Last year, he won first place at both the provincial and national levels in the single-single division and his employer rewarded his outstanding performance with a brand new Ford pickup truck.

Ward said that through the years the event becomes easier because he learns from his mistakes. “I watch the other competitors,” Ward said. “That’s my way of getting better. You get a score sheet, so I try to work on those areas I didn’t do as well in.”

Ward also said Con-way allows him and other company drivers participating to practice when the championships are looming.

“We come in on the weekends and practice,” he said. “We’ll set up some of the obstacles here in our yard and practice. We help each other out because we aren’t necessarily in the same class.”

Though everyone I’ve spoken with about their experience at the competition agrees the event is filled with positivity and friendly competition complete with cheering and waving from the sidelines, the pre-trip inspection is the part of the competition most drivers worry about.

“They have eight minutes to go around the vehicle, find five defect tags hidden and for full marks, they need to know whether or not the defect is major or minor,” said Joslin. “You’ve got the man or woman in the black uniform, with a bulletproof vest on and a clipboard watching you. No pressure.”

Ward said the national pre-trip inspection was the most difficult, since the competitions get more challenging as you move up in the championships.

“I found four out of five. It was very hard this year in Vancouver. I know there were a lot of competitors that only got two out of five,” recalled Ward of the national championships.

“The one that was tripping everyone up last year (at the Ontario provincials) was a fuel cap was loose on the passenger side,” said Joslin. “So many guys were just looking at it and saying ‘Major defect,’ and moving on. And in fact, it’s a minor defect.”

Ward said his favourite obstacle is the serpentine with three barrels. But more than anything, Ward says he likes the competition because he enjoys getting together with the other competitors he got to know over the years of being a participant.

With the good word about the championships, many representatives have said they usually get the same drivers year after year. This is no doubt due to how enjoyable the games are, but also a reflection of how little the championships are publicized.

“The central and Ontario events are always looking for more people,” said Doug Nicholson, service centre manager for Con-way based in Hamilton.

Though Nicholson said Con-way doesn’t have a problem supplying drivers for these events, there is a shortage from other transport companies. “Possibly because the other companies don’t promote as well as we do,” he guessed. “You have to understand it’s an inconvenience because I lose drivers for a short period of time during those events…but we’ve managed over the years.”

Ewen Steele, president of the Ontario Truck Driving Championships, speculated that the fees are sometimes to blame for the lack of registration.

“A lot of fleets regard the cost of entry (it’s $50 for the central Ontario regionals, $200 for Toronto regionals and $299 for Ontario finals) and paying for hotels as an expense,” said Steele. “I would counter that by saying, ‘How much has your best driver saved you in the last year by being accident-free?’ It’s easy for people who have to work with numbers to identify expenses because it’s difficult to measure the savings.”

Joslin, agreed with Steele adding, “When you think about the value that a truck driver holds in his hands and the impact that the driver has on the trucking company, I think this is a small way to say to that person, ‘Thanks. I really appreciate your good work.’”

Danbrook suggested that the companies not sending their drivers may not be the problem, but rather the drivers themselves who are hesitant to compete.

“I don’t think we’re near as appealing to the drivers nowadays because they’re on the road for a week at a time, and when it comes to the weekends, they want their own time,” he said. “But that’s just my impression.” For anyone hesitant about participating, former provincial winner Schaefer said that it’s important to remember it’s just a drive.

“Some guys are embarrassed to perform in front of their peers and judges. And I say to the guys, ‘Regardless of where you go, there’s always someone watching you. You just have to blank that out and remember you’re just going for a drive; that’s all it is.’” Joslin agrees and says that the competition is set up so “anybody can have a really good drive and anybody can have a really bad drive.”

“We’ve had national champions who go out on the course and crash and burn,” she continued. “And then last year we had a rookie—it was his first time competing—and he won the regionals, won the provincials, and went onto the nationals. And for a rookie to go onto the nationals, it’s fabulous.”

So, what would the president of the OTDC say to those competitors who are on the fence about joining?

“Come and prove to us that you’re the best in Ontario,” said Steele. “You already know you’re the best, so come on out and get some credentials to go with it.”

Regional qualifies will take place on Saturday, June 14 in both Toronto and Cambridge. The top placing performers who at those events will move onto the provincial championships which will take place in Barrie on July 12.

Transportation Media is the exclusive media sponsor of the Ontario Truck Driving Championships. Look for continuing in-depth coverage, including driver profiles and competition results on TruckNews.com.