Platooning for safety and efficiency

DETROIT, Mich. — Okay, it was a bit unnerving. Riding shotgun at 100 km/h in a tractor-trailer a mere 13 meters behind a similar rig went against deeply ingrained highway survival instincts and simple common sense.

The looming doors of the van in front just seemed too close for reaction comfort. And this was no test track; we were on I-75, winding our way through metro Detroit in mid-morning traffic. Sure, our driver was manning the steering wheel and fully focused on situational awareness, but his feet were essentially unemployed, as our Volvo VN’s throttle and braking were being remotely commanded from the Freightliner cab in front. We were “platooning,” our two rigs slipstreaming in close tandem like drafting NASCAR racers, a formation that has been shown to increase fuel efficiency of both the lead and following vehicle.

More formally known as Driver-Assistive Truck Platooning (DATP), this system is in final stages of development by Peloton Technology and is meant to synchronize the acceleration and braking of pairs of tractor-trailers to maintain a safe and steady following distance between them. The twin goals of platooning are to improve both the fuel efficiency and safety of on-highway heavy trucks. 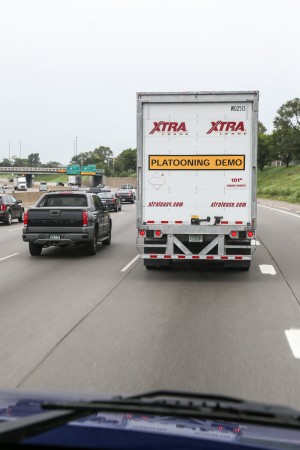 Seen through the camera, this may look like more than 13m separation, but that’s the distance Peloton’s DATP system rather precisely maintained during our Detroit demo ride.

How can 13 metres or less separation at freeway speeds be safe? Thanks to the lightning-quick reflexes of technology. More specifically, platooning builds on existing automated- and connected-vehicle technologies to take relatively slow human perception and reaction times out of the trailing vehicle’s braking equation, thereby eliminating roughly 30 metres of stopping distance at highway speeds.

Peloton’s major project partners are Meritor Wabco and Denso. Meritor Wabco is well known for its OnGuard collision mitigation systems that use forward-looking radar and assistive braking technologies to detect and react to imminent collision situations. Each vehicle in a platoon must be equipped with such a system. From Denso comes its DSRC radio system – dedicated short-range communications – that links the on-board processors in the two cabs via a 5.9GHz radio band allocated by the FCC specifically for use by connected vehicles.

When the DATP system is engaged, throttle and braking input data from the lead tractor’s processor are transmitted to the trailing vehicle’s processor by DSRC, allowing it to react almost instantaneously to match the lead truck’s throttle application or braking. This throttle/braking data can either come from the lead truck’s driver input, or from its collision mitigation system’s de-throttling or active braking. This dedicated radio link means that the rear truck doesn’t even have to wait for, or rely on, its own radar to detect that the truck in front is slowing or speeding up; its throttle and brakes simply receive those same accelerate/decelerate commands simultaneously.

We got a feel for how the system operates during a ride-along demo at the ITS World Conference in Detroit. Our two demo drivers were in two-way radio communication and once up to speed on sections of divided highway (the system in its current form won’t engage at speeds under about 60 km/h) simply each engaged a switch in their cabs while separated at normal safe distances. In-cab displays then notified both drivers that the DATP system was active, while a second screen gave each driver a camera view forward from the other truck’s perspective. With the system engaged, we watched as our now-semi-automated truck slowly eased itself up on its platoon partner and locked in at around 13 metres of separation.

That separation was maintained faithfully as the lead tractor driver responded to the ebb and flow of traffic and road conditions. Our driver’s feet remained flat on the floor (our own might have twitched a little.) When traffic conditions safely permitted, the lead driver even demonstrated an energetic stomp on his brakes – slowing briskly enough that his ABS and stability-control systems likely became interested – and our rig dutifully responded without decreasing the desired gap, and then powered itself on to accelerate away like a happy puppy on an electronic leash. 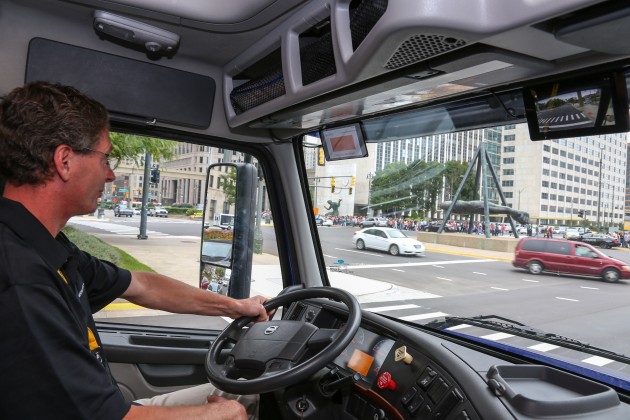 In current prototype form, each platooning demo tractor had two system-related screens above the windshield. One showed the system status (showing orange, for disconnected here) while the second showed the view ahead from the other tractor. In final form, these displays may be merged onto a single screen.

During platooning operations, trucks are monitored continuously by Peloton’s cloud-based Network Operations Center (NOC). In fact, the NOC must be consulted by drivers before a platoon link can be established.

To form a platooning link, a driver sends a request to the NOC to pair with a potential partner. Once the other driver agrees, the drivers bring their trucks within linking range. The NOC will then confirm that location, road and weather conditions are appropriate for platooning, and will assign the heavier of the two trucks as the lead vehicle. In other words, the truck with the ability to brake in the shortest distance will always be assigned as the follower in the platoon. The drivers then simply engage a switch in their respective cabs. Trucks and drivers connect to the cloud-based NOC via cellular networks, and fleet managers will be able to access data on their trucks via the NOC.

Drivers can disengage the platoon and separate trucks at their discretion, no differently than they would disengage normal cruise control. Increased separation is automatic should the following truck’s radar detect another vehicle cutting in between the platoon, and once the risk has passed, the system will then draw the trucks together again. And the NOC will automatically disengage the link when conditions dictate, such as when a platoon exits a multi-lane divided highway system.

Peloton has conducted industry-standard SAE J1321 fuel economy testing in partnership with the North American Council for Freight Efficiency and the C.R. England trucking fleet. According to company releases, this testing has reduced fuel use (and related emissions) for the trailing vehicle by an average of 7-10%, while even the lead vehicle typically sees about half this much savings. In these days of volatile fuel pricing, such savings can have an obvious and beneficial effect on a balance sheet. However, with pricing yet to be announced, it’s premature to make any projections regarding return on investment. When Peloton brings the system to market, platoon size will be limited to two vehicles, but testing will continue to evaluate potential for larger formations.