Metro Truck Group seems surprisingly reluctant to tell its story. When a meeting is finally scheduled, senior managers spend much of their time explaining that they don’t normally do this sort of thing. The Freightliner dealership group based in Ontario’s Niagara Region rarely participates in interviews. When its Brantford dealership moved into a new building this winter, it even did so without the fanfare of a grand opening. No ribbons were cut. No speeches made.

But there is no escaping the spotlight of a reality show. 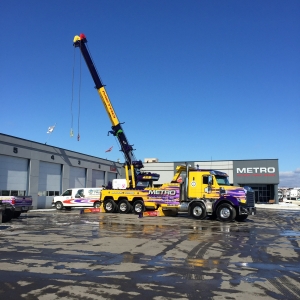 Metro’s new 360-degree wrecker will be featured in the first season of Heavy Rescue: 401 – when the producers of Highway Thru Hell turn their cameras toward southern Ontario’s 400 Series highways. And if past ratings are any indication, plenty of people will be watching. This spring, Highway Thru Hell was one of the Top 5 shows on the Discovery channel, and it was one of the Top 10 shows aired on specialty channels in general.

Then there is the matter of the award. Coca-Cola recently recognized Metro Freightliner as 2015 Supplier of the Year, with a ceremony held this March.

If the company is trying to shun the spotlight, it’s becoming well known despite the efforts.

What started in 1969 as a two-bay collision shop has grown into four locations, 283 employees, and one of the largest repair shops in North America. Metro Freightliner Hamilton was purchased in 2004, and a flagship location in Stoney Creek – once a Wabco facility — now spreads over 19 acres with 90 full-service bays connecting to a 120,000-square-foot shop. There are two 60-foot correction racks and a pair of 80-foot downdraft paint booths. The Metro Collision Services division now includes 19 heavy tow and roadside recovery units like the 360-degree rotator. And there are sites in St. Catharines (opened in 2011), Milton (2013), and Brantford (2016).

“We never promoted a new store. Never promoted this facility. Never promoted buying out Paling, and they were our biggest competitor on the body shop side,” says Ivan Cappellazzo, co-owner and group vice president. “It was just ‘fly under the radar.'”

But it’s difficult to ignore the ever-expanding operation. “In the last seven years our growth has just been crazy,” says the procurement team’s Alanna Hockton.

The towing equipment is even known to venture well beyond the border. Recently, that meant traveling to Oklahoma to pick up a truck with a problem transmission, and towing things back at no cost. “There’s not a lot of people that will go into the U.S. to recover anymore,” Hockton says. But it sometimes makes business sense to bring a truck home, where it can be repaired by a known team.

Cappellazzo even struggles with the idea of shining the spotlight on any particular department. “We don’t let ourselves be divided as departments,” he says. “We present ourselves as one … we cover that truck from start to finish, whether that’s sales, parts, service, collision, towing.”

But Cappellazzo stresses the expanding services are a competitive advantage. “Someone’s always chomping at your door to get your business,” he says. “And we have the will to win.”