I’m not sure whether it’s optimism or denial, but I feel like when all is said and done with this Covid-19 crisis, the impact will not be as severe as some have predicted.

This prophecy comes on the heels of conflicting reports from the U.S. and what we have heard from Alberta Premier Jason Kenney.

While Kenney is predicting as many as 800,000 Covid-19 cases in Alberta by the end of the summer, and between 400 and 3,100 deaths (a rather large gap between the low and high numbers), in the U.S., the news is of positivity. Medical officials south of the border, where they now have over 400,000 confirmed coronavirus cases, say social distancing is working, and though this is expected to be a bad week, the curve is appearing to begin to flatten in many hotspots.

What is more concerning, however, about Kenney’s forecasted high number of cases is what the impact Covid-19 will have on the province’s economy.

Kenney said Alberta could see unemployment reach 25%, which would be the highest unemployment rate since it has been tracked in Canadian history.

According to a CBC article, the highest unemployment rate in Canada was in Newfoundland and Labrador in September of 1984 when it hit 22.7%. During that same time, Alberta saw its highest rate at 12.4%.

These numbers would be devastating to the province, and would cripple several industries, including trucking, though hopefully not to the same degree, as people need to eat and products need to get transported whether they are working or not.

Nevertheless, trucking would take a hit, much stronger than any it felt before, including the most recent – and seemingly never ending – oil and gas downturn.

Just when Alberta was looking to get its legs under it again after the 2015 crash of the energy sector, Covid-19 announced its presence, and things could become worse than they have ever been before.

But the optimist in me believes Covid-19 cases and deaths will not be as high as some predict (but only time will tell). Not to say this hasn’t been devastating with thousands dying around the world and people’s lives turned upside down. If it were not for social distancing measures and the closures of all non-essential services, the numbers would be much higher.

But there are countries getting back to normal. Though I am aware some of them were on top of this virus sooner, and imposed stricter social measures to mitigate its spread – such as Taiwan, Japan, and South Korea – the fact that areas like B.C., California, Washington, and now even New York are seeing a drop in new cases and the number of deaths, is an encouraging step forward.

Which is why it is so important for people to adhere to social distancing rules and stay home. The shorter this lockdown goes on, hopefully the less of an impact it will have on our economy.

Alberta doesn’t want to deal with 25% unemployment – 10% is hard enough.

And though trucking has always touted itself as being recession-proof, numbers still indicate that activity is down during this pandemic, and who’s to say what would happen with 25% unemployment.

So, I really hope I’m right, and the more optimistic projections come to fruition.

Because no industry is immune to a down economy if things get bad enough. 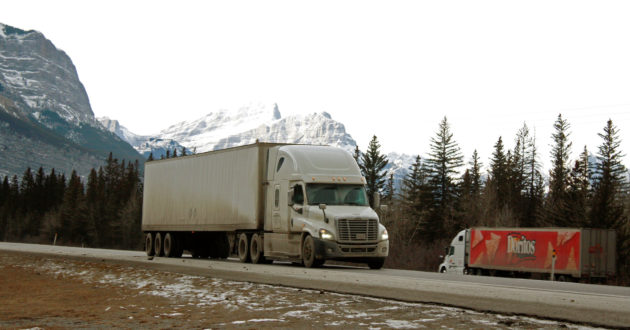