So I had some fun last week in Arizona with a few of Western Star’s latest trucks and the continuation of the company’s anniversary celebrations. They refer to it as ‘Celebrating 50 Years of Legendary Awesomeness’. No hyperbole there.

But in fact it has been pretty awesome. Launched by the White Motor Company in 1967, the Western Star truck was a highly customized machine first aimed at trucking in the forests of western Canada and the U.S. If you wanted holes in the frame here as opposed to there, you had only to ask. Tough and capable, it was built in Kelowna, B.C. for many years before Freightliner bought the company and not long afterwards moved production to Portland, OR. 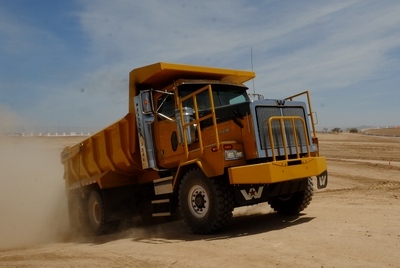 It’s a little less customizable today, but the venerable model 4900 is still around. Believe it or not, the very first Western Star itself is also still with us. Sold to a man in Seattle, WA, it was used by three generations of his family and was retired not too long ago. Bought back by the original selling dealer, the truck was restored to its virgin glory and made the trip to Arizona.

It was interesting to see it parked beside the very modern 5700XE highway tractor out there in the desert. A contrast, yes, but the roots are still very much evident in the newer truck.

THE PRESS WAS GATHERED there just outside Phoenix mainly for the introduction of Western Star’s all new XD-25 off-road truck. The newest member in its line of XD OffRoad trucks, it’s a 25-ton hauler aimed at smaller off-road jobs like construction, mining, and quarry site hauling. Despite its size and bulk, it can manage on-the-road speeds up to 65 mph or 105 km/h, so in some cases it can be treated as an on/off-road machine.

While it looks something like an ordinary 4900, much more steel is involved in its construction. It’s by no means a converted highway truck.

The XD-25 presently comes with a 14-liter Detroit Series 60 Tier 3 engine mated to Allison Off Road Series transmissions and planetary gear sets. The motor will be replaced by year-end with a Detroit DD13.

Platt notes that it’s the only Western Star on offer that’s the cheapest in its market.

“Our customers want an off-road solution that has great ton-per-mile savings, and a lower purchase price over conventional articulated equipment,” she said.

The fun I mentioned earlier came by way of a hilly, curvy dirt truck usually used for ATV races. I drove a 4900XD high-reach crane truck around the track, as well as a 4700SB water truck with the front wheels driven by hydraulic means.

The star of the track, though, was the big and tough XD-25. Its 20-yard dump box was empty so the 500-horse Detroit Series 60 Tier 3 engine felt mighty strong. Mated to an Allison 4500 RDS automatic transmission, that thing would move. I booted it and tried hard to grab some air on a steep short hill just before the finish line but all I managed to do was spray dust over other journalists waiting to take it for a spin. They bitched and moaned as I climbed down and out of the beast, but I apologized not at all. I couldn’t wipe the smile off my face.

THE COMPANY ALSO INTRODUCED several new options available now for many of its other models. Perhaps most interesting among them is the RollTek seat system.

Available for Western Star 4700, 4800 and 4900 truck models, it automatically inflates side-impact airbags, tightens seat belts, and compresses air-suspension seats to the lowest position to prevent serious injuries to the driver in the event of a rollover.

Other new features and options include:

• The new sealed frame rail for Western Star 4700, 4800, and 4900 truck models, reduces corrosion on double-channel and partial-liner configurations. Sealed along the edges, the flexible water-tight seal prevents the intrusion of liquids and minimizes rust that might occur due to environmental factors and road de-icing products.

• Aimed at applications that can cause abrasion in the chassis, such as construction, logging, and road maintenance, the new abrasion tape for exterior harnesses on 4700 and 5700 truck models will improve durability. Each harness is wrapped in an abrasion-resistant seal and then fastened securely to the frame rails to prevent damage to the wires from debris, water, and chafing.

• With cab access and increased ground clearance, the new aluminum diamond plate tool box for the Western Star 4700 is said to be durable enough to withstand harsh working conditions.

• The 5700 model is now available in a truck configuration for expeditor and RV applications in a day cab or sleeper.

Look for more on Western Star in the June issue of Today’s Trucking.

WHEN WILL PEOPLE STOP getting it wrong when they talk about so-called ‘autonomous’ trucks? Drivers seem to be the most ill-informed, and they’re all bemoaning the loss of their jobs within the next six months, it seems. But they’re by no means alone.

I read an online article about all this the other day — can’t remember the source — and had to laugh at the wildly misinformed comments section. I should have known better than to wade in there. No matter the subject, online commentary is uniformly crazy, and when the odd sensible opinion is uttered, it’s also ignored. People want to be wrong, I guess.

Every driver who publicly expressed his thoughts, and about 50 of them did, saw the end of his job coming real fast.

I blame the media. No, wait, I can’t do that. I AM the media. But wait again, I do have to blame the media, and not just the consistently wrong-headed popular press. Give those guys a vaguely technical story and they’ll ignore truth in favor of drama every time. While displaying not an ounce of understanding in the first place. They’ve been writing that word ‘autonomous’ from the get-go. 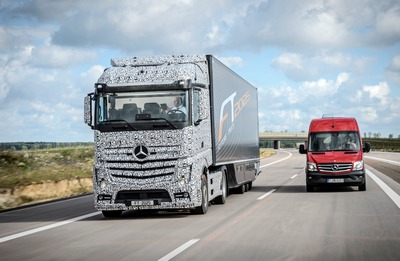 Even members of the trucking press have been doing that, ever since Daimler showed us their first ‘semi-autonomous’ Mercedes Actros in Germany a couple of year ago. With the word ‘semi’ in there, we mean a truck that can operate by itself in certain conditions — on the open highway. In that case, and now, the truck itself knows when it operate independently and when it can’t, alerting the driver — who is always there — when he needs to take over. Like when passing another vehicle or exiting the highway.

THE WORD ‘AUTONOMOUS’ shouldn’t even be in the common-parlance equation. Not yet. And not soon either.

But it was there in the open a couple of weeks back, according to my colleague, Today’s Trucking editor John G. Smith. Reporting on a panel session at the recent Alberta Motor Transport Association’s annual convention, he said panelists agreed that truck drivers will be at the wheel for years to come. Their consensus was that it would take 10 years for fully autonomous trucks to hit the road.

I disagree, for what it’s worth. Call it 15-20 years, I’d say, unless you’re talking about huge earth and rock movers in mines and quarries and such. You can already find 100% autonomous trucks working there. Next, and maybe these in 10 years or even fewer, we’ll likely see trucks moving containers around ports along set, semi-public, short routes from ship to yard, etc. Los Angeles/Long Beach, Rotterdam, places like that. Not much else.

THE OBSTACLE ISN’T TECHNOLOGY. Heck, our trucks can be made sort of semi-autonomous right now. Collision avoidance systems that take over long before the driver can react, smart cruise control that recognizes topographical changes and adjusts accordingly (and soon, that adjustment will include automatic boosts in horsepower to better manage grades), lane guidance… you name it, we’ve already got it. And we’ve had some of it for years.

I remember thinking back in 2014, while watching that semi-autonomous Actros cruise down Autobahn 83, that all we needed to automate a well-kitted truck was some manner of electric steering and a more refined guidance system. We already had everything else, or mighty close to it. No, it wasn’t such a huge or unexpected technological leap.

The barriers are social and regulatory, as Daimler trucks chief Bernhard said at the time. People do and will continue to fear trucks of any description, with or without a driver in charge. That’s the biggest leap. The very idea, let alone the reality, of a driverless truck is a nightmare for some, even though it would probably be a safer truck. Governments and states, with the exception of Nevada on this side of the Atlantic, don’t have a clue how to deal with this. Nor does the insurance industry.

But ‘driverless’ is another word we should forget for a while. German law actually requires two drivers on the routes that are presently legal for semi-autonomous testing. Nevada already has a special licensing system for drivers of such trucks.

Relax, people. Most of you will be retired before your job’s in jeopardy. And some driving jobs will never go in the autonomous direction. If you drive locally, I’d be more worried about drones.

The truck maker is developing a prototype Class 8 hydrogen fuel cell tractor designed to provide true zero-emissions operation. By using the fuel cell – provided by Ballard Power Systems in Burnaby, B.C. – to recharge the batteries, the only emission coming out of the tailpipe will be water vapor. The T680 tractor uses lithium-ion batteries to power a dual-rotor electric motor, driving the rear tandem axle through a 4-speed automated transmission. The truck is expected to be ready for initial track and on-road testing in the fourth quarter of this year. 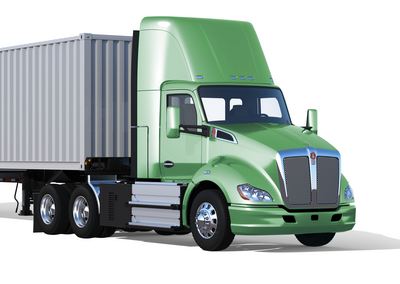 These two T680 tractors will be identical, with the exception of their power systems. Each truck will have an electric-only range of approximately 30 miles, and the on-board fuel – hydrogen or natural gas -will provide sufficient range for a full day in regional-haul applications.

The first unit for this project will be built in 2018. Kenworth engineers will be able to make design and system refinements to this 2018 unit based on data collected from this year’s real-world testing of the initial, 2017 hybrid-electric T680.

All six prototype T680 day cab drayage tractors will transport freight from the Ports of Los Angeles and Long Beach to warehouses and railyards in the Los Angeles basin.

“These T680 day cab projects provide an excellent opportunity for Kenworth to develop and advance important technologies that may play a critical role in the trucks of tomorrow,” said Patrick Dean, Kenworth chief engineer. “Within the next decade, hybrid-electric powertrains are expected to be required to satisfy emissions regulations in several major U.S. metropolitan areas. For example, California is considering regulations that will require zero-emission levels for port drayage trucks operating in specifically designated areas. We look forward to playing a leadership role to meet the opportunities and challenges ahead.”