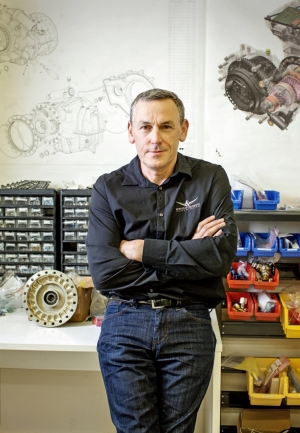 Ian Wright co-founded Tesla Motors and developed the fastest street-legal electric car in the world. But these days he has set his sights on something bigger – an electric powertrain for commercial vehicles.

Wrightspeed’s range-extended electric powertrain known as the Route enters production in a matter of months, and the company CEO boldly predicts that electric waste trucks will overtake the sale of diesel models in as little as five years.

There have been other attempts to electrify trucks in the past. One thing that sets the Route apart, however, is its Fulcrum turbine, which recharges batteries by burning diesel, Compressed Natural Gas (CNG), Liquid Natural Gas (LNG), Liquid Propane Gas (LPG), or landfill gas.

It can be tough for some people to comprehend, even when staring at a working powertrain. “They’re looking at the space where [the diesel engine] used to be and it isn’t there,” he says. “The diesel engine is gone, the transmission is gone, the prop shaft is gone, the differentials are gone.” The Route isn’t a hybrid, after all. It’s an outright replacement for traditional powertrains.

Each wheel has a motor controller and motor driving a four-speed planetary gearbox. In a garbage truck with four wheels, that collectively adds up to 600 continuous horsepower and a peak of 1,200 horsepower for regenerative braking. Energy is stored in a 60 kWh battery pack, which is recharged by the turbine or by plugging a parked truck into the power grid. The turbine will typically begin to work after the vehicle travels about 30 kilometers, and will run for a couple of hours before the charging is done.

“It’s a fairly tricky thing to make such a high-power system,” he says. The Route also weighs hundreds of pounds less than a comparable diesel powertrain, unlike a hybrid system that would essentially need to add components. There are no aftertreatment systems, either.

“I can’t emphasize enough how much difference the drive cycle makes. It is really the key thing,” he adds. “If it’s not doing the hard stop-go, then you don’t save as much fuel. But in the garbage truck drive cycle, we expect to save about 60% of the fuel and pretty much all of the brake wear.”

FedEx put the first two powertrains to work, and Wrightspeed already has orders for 260 more. Mack also showcased a retrofitted LR model, with a 40 kWh battery pack, at the recent WasteExpo 2016.

But Wright chuckles when discussing Nikola Motors and its plans to produce an electrified Class 8 truck. “It doesn’t work in longhaul. It doesn’t work. You can’t wish away the laws of physics,” he says of that start-up company. “You’re not going to save any fuel and it’s going to add fantastically to the cost of the vehicle, so why would you do that?”

As for the 7,000 people who have reportedly put down a $1,500 deposit for one of those trucks? You can probably find just as many people who would buy a pet rock, he says.

Wright also discounts many other earlier attempts at electrified commercial trucks. “It’s got to actually do the job. There’s been plenty of what I would call lame attempts where there isn’t enough range, there isn’t enough power,” he says, referring to electrified buses that struggle to climb 15% grades. “You’ve got to do the engineering properly.” 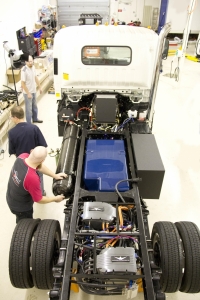 Then there’s a matter of cost. Even with a range extender, electric trucks still require big batteries, and they are more expensive than traditional powertrains. That limits the technology to applications where enough fuel can be saved.

The perception of electric vehicles has come a long way since Wright helped to launch Tesla, but he still sees barriers to electric cars becoming anything more than a niche product. “We’re nowhere close to that tipping point at current fuel and battery prices,” he says. Government incentives are not his answer to boosting such acceptance, either. They simply distort markets and can disappear with the stroke of a pen. “As an entrepreneur, we tend to ignore that completely.”

Still, commercial applications are not his only focus. Wright is thinking about improving on the famed X1, his prototype electric car that can run from 0 to 60 miles per hour (about 97 kilometers per hour) in 2.9 seconds.

“I had a good discussion with a potential partner about doing exactly that yesterday,” he says. “It does allow us to showcase the technology in a pretty interesting way … stay tuned.”

–          Ian Wright is a keynote speaker at the Surface Transportation Summit in Mississauga, Ontario on October 13. Visit www.surfacetransportationsummit.com/register/ for details.

NOTE: An original version of this article referenced an incorrect capacity for the battery pack. The error has been corrected in this version.