Ever wonder if the little trucks ever get pulled over? I got my answer last Wednesday when I got an email that Halton Police’s commercial motor vehicle enforcement unit (CMV) were pulling unsafe trucks off the road at the Premium Outlet Mall on Steeles Ave and Trafalgar Road.

Truck inspection officers set up shop in an east end parking lot while while a couple of patrol cars cruised the perimeter roping in trucks that looked “shabby” and might not pass a safety inspection.

The officers targeted light and medium trucks in particular, including pickups and trailers, vehicles that would usually fly under the radar at the weigh stations on the 401.

The jackpot was a contractor’s two-axle wide-body trailer which failed on many levels—everything from defective lights, to bald tires, to a missing wheel fastener, to a worn and deformed hitch ring that included a ballpoint pen refill holding the tongue latch in place.

“It’s the worst I’ve seen in a long time,” said senior regional enforcement officer Pat Martin who pulled the plates in short order. In a few hours, regulatory officer had examined 14 vehicles and placed 9 of them out of service. They also laid 31 charges and seized three plates. Most of the trucks were allowed to proceed after repairs were made.

Cons. Sandifer acknowledged that the 64% failure rate was higher than the 38-40 % he usually gets. But he adds this is not a snap-shot of the overall truck population, since these units were chosen because they might have problems. By comparison, a recent inspection in Norval put 10 out of 17 vehicles out-of-service.

Sandifer’s catchment area includes Acton and he expects to be back in town checking trucks in the near future. “Acton’s tough, because the only good place to conduct inspections is at the arena, and you have to get there early to set up a place so nobody parks there.”

Sandifer says the popular term “safety blitz” is not quite accurate since he’s often working alone. “Aside from our multi–jurisdictional inspections that we do in October at Mohawk Raceway, this is what I do everyday—it depends on how many officers I have to help me,” he said. 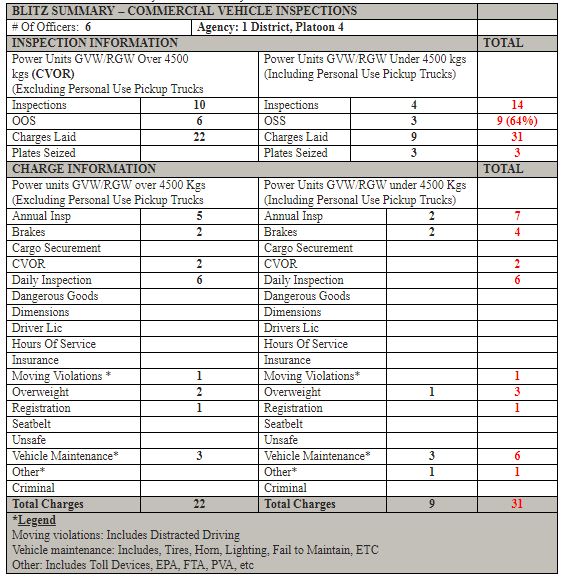