It was supposed to be a good year for Ennismore, Ont.-based arborist Treescape Canada. Owner Mike Crough made a major investment in a $600,000 Mack TerraPro with a Palfinger 35-ton knuckle boom crane and grapple saw attachment.

The new truck, expected to arrive April 1, would reach heights of 106 feet for pruning and sectional tree removal. It would allow a three-person crew to do the work that used to require three trucks and nine staff, a major productivity improvement urgently needed in light of the current labor shortage.

Treescape began booking projects for the summer, but as of mid-November, the truck still hasn’t arrived.

“It has been challenging from a business planning perspective,” a frustrated Crough told Today’s Trucking. “We are constantly pricing work for this truck and being cautionary with regards to what we promise. But even our cautionary approach has had us farming out some of the work we received to competitors or bringing in subcontractors to do the work, because we have to take care of the customer.”

Outsourcing to a third party costs as much as $3,500 a day for a suitable truck and crew. On Sept. 30, Crough received word the truck had arrived at the dealership, but then more delays to get the PTOs configured. After that, it will still require the crane installation.

“The crane installer is pretty frustrated because they have a lack of chassis showing up to keep their staff busy,” Crough said.

He’s not alone. And truck buyers are becoming increasingly frustrated over the supply chain challenges facing all truck makers, primarily as a result of a global semiconductor shortage. And it’s not limited to small fleets, either.

“Maintenance costs are creeping up,” he said, “because we don’t have the equipment we need to bring those costs down.”

He said TFI International wanted 1,000 trucks for its U.S. LTL division, but has only been promised 500 through the first quarter of next year. It wanted 3,000 in total for truckload and LTL operations in the U.S., and only received commitments for 2,000. He was promised 165 trucks by the end of October but only about 100 arrived.

“We got burned a bit by this supplier…he gave us 40 pages of excuses why he can’t deliver,” Bedard complained. “For 2022, we are bringing in three more suppliers.”

He said one trailer manufacturer recently told him it had more than 5,000 orders in the queue and will only be able to deliver 1,000 to 1,500.

“Our fleet is aging quicker than we’d like, because we can’t find the equipment we need,” said Titanium chief financial officer Alex Fu on a call with analysts. “We are keeping trucks and trailers on the road longer than expected. It is a cost of running the business right now.”

There are few short-term solutions. Used truck prices have spiked and inventories are depleted. But truck makers plead for patience as they do their best to manage a situation outside of their control. Some have suspended production at times, while others continue building trucks, then park the unfinished units until needed components arrive. That’s the approach Daimler Trucks North America (DTNA) has taken.

“The easiest thing in the world is to tell them ‘I’ll be able to put in the order, and in six months you’ll get your truck.'”

“We have a lot of [unfinished] trucks parked,” John O’Leary, CEO of DTNA told a group of trucking journalists Nov. 11. “I can’t disclose the figure but it’s a big number. We could’ve shut down and not built those trucks and we would’ve saved a lot of money in cash tied up in balance sheets and the logistics costs of keeping plants open building vehicles we can’t deliver, but we made the conscious effort to build those trucks so that when we do get one or two chips, which is all we are missing, we can immediately turn them over into a sold status and get them to the customer. We feel it’s the best thing we can do for customers.”

O’Leary said an effort is also being put forth to be transparent and honest with customers about delivery timelines.

“We try to tell them the absolute truth,” he said. “The easiest thing in the world is to tell them ‘I’ll be able to put in the order, and in six months you’ll get your truck.’ If I know that to be the truth, I’ll tell them that.”

But with certain models, he said, there are still significant backlogs to work through. O’Leary said the company doesn’t see an immediate solution to the chip shortage, though he hopes it eases next year. Meanwhile, the company has “engineered around some chips” so it can produce trucks with fewer semiconductors. “We are trying to be creative in terms of being able to not rely on certain chips anymore,” he said.

Mack Trucks’ senior vice-president of sales and commercial operations, Jonathan Randall, says trucks in this environment are allocated based on sales targets, so every region gets its fair share – though all would like more. “We do it in a way that makes nobody happy,” he joked in a September discussion with Newcom Media editors. “We have our strategic growth goals by market and by segment and by application and we work with our dealers around achieving the Mack growth strategy.”

It temporarily suspended order intake for 2022 to manage expectations. Dealers, meanwhile, are working with customers to extend leases and trade cycles.

“We find that our dealers are creative and flexible in working with their customers to try to make sure the customers are still able to meet their demand and service their customers,” he said.

While some truck buyers are extending trade cycles, combing through used truck inventories, scouring auctions, and leasing equipment, others are grabbing whatever they can find. Crough needed a truck with a hook lift for Treescape’s sister company Robinson Storage and was bracing for another long wait. When he found out Rush Truck Centre had one on its lot, he pounced.

“Because of the supply chain, I raced down right away, put a cheque in his hand, and had the truck that day,” he said.

While it seems everyone wants more trucks than they can get their hands on, Titanium’s Daniel sees one advantage of the current situation: a potential for fleet acquisition opportunities.

“A lot of smaller trucking companies are going to really struggle to get equipment. Used equipment is going through the roof and interest rates are going up. The cost of capital and carrying costs are going to make it very difficult for companies that don’t have strong balance sheets to reload in the next few years,” he said. “That’s going to present a significant opportunity for us, and it’s going to be a challenge for others to live through that.”

So, when will the supply chain challenges around truck production ease? No one seems to know, for sure. During a capital market update Nov. 11, Daimler Truck’s global chief financial officer Jochen Gotz said “We also expect a severe impact in 2022…we expect a better situation regarding the supply chain than in the second half of 2021, but at this point in time there is still a high level of uncertainty.”

“We don’t see relief from that strain on the supply chain in the foreseeable future,” Mack’s Randall agrees. “We think we’re going to be dealing with this for a while. We are going to adjust our expectations.”

But there is good news, according to industry analyst ACT Research’s president and senior analyst Kenny Vieth. “In the recent round of Q3 earnings calls, major automotive CEOs indicated that they believe the semiconductor shortage bottomed in the September-October period,” he says. “Backing up those claims, for the first time in eight months, automotive inventories in the U.S. actually rose sequentially in October.”

But, he adds, “Less positive is that despite their lofty roles at the top of the global automotive industry, the CEOs remain less than forthcoming about when they believe the chip situation will experience material easing.” 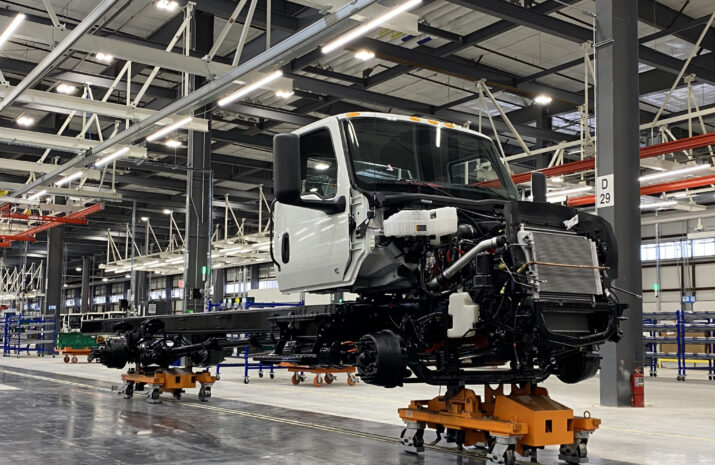 Fleets of all sizes struggling with equipment procurement