BLOOMINGTON, Ind. — Trucking conditions in the US softened in April, reflecting some weakness in the sector, according to FTR’s latest Trucking Conditions Index.

The April reading fell 9% from the previous month.

FTR says the weakening was primarily due to the suspension of the hours-of-service rules, which resulted in more available capacity and less pressure on rates.

The future outlook shows an increasingly positive environment for truckers, because of expectations of a tightening market as additional regulatory drag appears, leading to a “likely” capacity crisis in 2017, FTR reports.

“While still at a reasonably strong level the TCI is indicating a moderating environment for carriers,” said Jonathan Starks, FTR’s director of transportation analysis. “Rate increases have pulled back over the last couple of months and, although still positive, will lessen year-over-year gains later in the year. Economic indicators still show a slow growth environment for both the economy and for freight. Load board data from Truckstop.com continues to show a return to normal activity following last year’s tight conditions. Shippers’ desires to secure capacity should keep contract rates growing, but both contract and spot rates are susceptible to big drops if the economy is unable to accelerate after the weak start to 2015.” 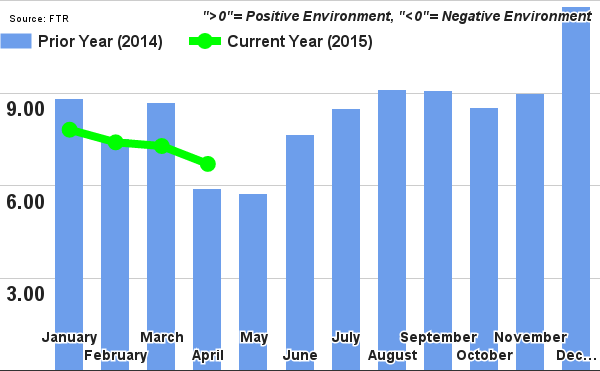