BLOOMINGTON, Ind. – Shippers in the U.S. are experiencing tight capacity and higher trucking prices, according to the latest Shippers Conditions Index from FTR.

The index remained in negative territory at -8.8 in December, unchanged from November’s reading.

“The question for many shippers is how long will the tough times last? When we look at freight demand, which has been strengthening for nearly a year now, our forecast shows robust demand for most of 2018,” said Jonathan Starks, chief operating officer, FTR. “If there will be improvements for shippers, it won’t be because of a softening of freight. Truckstop.com’s Market Demand Index, at roughly twice the level that it was at this time last year, highlights the tight capacity situation within the spot market. It began rising again in February after softening following the strong holiday season. For shippers who haven’t locked in capacity, this year’s spring shipping season will be a tough one.”

FTR said shipper conditions could improve later in the year, depending on the ability of carriers to add capacity to meet strong demand.

“We are seeing record truck and trailer orders, which indicate buying above replacement demand, and much of that will hit the market in the second half,” said Avery Vise, vice-president of trucking at FTR.  “However, that narrative is somewhat disrupted by ELD implementation and the driver shortage. People naturally think of the driver shortage in terms of the supply of drivers, however, changes in carrier productivity are just as important. We anticipate that shippers and carriers will implement a host of productivity enhancements – measures like drop-and-hook, better scheduling for pickups and deliveries, faster dock turnarounds, better coordination among shippers through intermediaries, and so on. Higher rates motivate shippers to be much more flexible on steps that increase carrier productivity.” 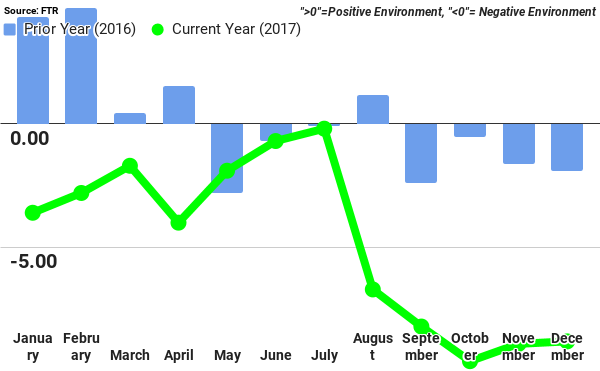