Kenworth forges ahead in vocational market with the T880 and T880S

KIRKLAND, Wash. – Kenworth Trucks is hyping its vocational T880 series, believing the U.S. and Canadian economies are poised to continue an upward trajectory.

“Whether you’re talking vocational or just the market in general in North America,” said Mike Dozier, general manager of Kenworth Trucks and vice-president of Paccar, “the underlying fundamentals all remain very positive and I think we’re certainly seeing that in vocational segments.”

Inviting members of the media to its head office just outside Seattle, Kenworth offered up three dump models and two mixers for a test drive on the track at DirtFish rally school.

The two mixers were quite diverse, one a traditional diesel engine (the T880S bridge mixer), while the other ran on compressed natural gas (T880S nat gas mixer). Each ran on an Allison transmission; the bridge mixer on the 4700RDS-7-speed and the nat gas variety on the 4500 six-speed automatic.

Kevin Baney, Kenworth assistant general manager for sales and marketing, highlighted the Cummins-Westport ISL G-near Zero engine in the nat-gas mixer, which emits 90% lower NOx than current U.S. requirements. The engine will target certain markets that have green energy requirements from customers in locations such as California.

“There’s pretty good alignment with what we’re seeing with sentiment within the industry and certainly in the vocational segment,” said Dozier, “so we expect our expectations to continue.”

Kenworth unveiled its new flagship T880 model four years ago, with the T880S being the latest addition to the lineup.

The T880S is available with a set-forward front axle, which Baney said helps increase the trucks maneuverability.

“The T880S is well suited for truck operators in ready-mix, dump and mobile crane applications where every incremental pound of payload delivered contributes directly to the bottom line,” Baney said. “The T880S enters into the market in the midst of an excellent vocational market, and we’re receiving strong T880S orders from customers.”

Stepping into the spotlight for its former flagship truck – the T800 – the T880 model now makes up approximately 75% of sales compared to the former model. But as Baney pointed out, there is no plan to phase out the T800, but the company will rather let the market decide on the level of its continued production.

Baney also touted Kenworth’s upcoming bright-trimmed air intake, which he said customers have been requesting for some time. The chrome spec’ will be available this month and in the aftermarket.

Already available on the T680, variable speed fan drives will soon be offered on the MX-13 engine and will provide a bump in horsepower, better fuel economy, decreased noise and vibration, and a reduction in dust.

In addition, Baney underscored the fact that more than 50,000 Kenworth trucks are now connected through the company’s mobile diagnostics technology TruckTech+.

“These numbers just continue to amaze us since the launch of this program with the Paccar engines in 2015 and now last year with Cummins,” Baney said. “This is really the basis for our connected truck platform that we continue to expand. This provides not only ourselves, but our dealers as well as our customers a lot of information we use to make the products better.”

Kenworth has 382 dealer locations in North America, 4,700 service bays and has invested $600 million into its facilities over the past five years. 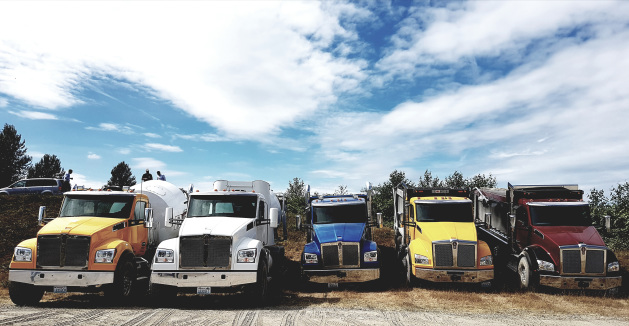 Kenworth Trucks showcased five of its T880 and T880s model trucks during a ride and drive July 21.