Mercedes is positioning the new van as “right-sized” for commercial applications, capable of doing the job of a full-sized van in a smaller package. It has the benefit of being more maneuverable than full-sized vans in tight urban environments and can be parked inside a garage or in an underground parkade.

The Metris is based on the popular Vito model offered in Europe. It offers up to 67% more payload and 40% more cargo volume than other mid-sized commercial vans currently on offer, Mercedes claims. The cargo version carries an MSRP of $33,900 in Canada, making it the most inexpensive Mercedes vehicle available.

The Metris is a high-end van though, featuring many of the same capabilities offered in the full-sized Sprinter.

“The Metris will be following in the footsteps of the Sprinter as the second model offered by Mercedes-Benz Vans in Canada,” said Pablo de la Peña, vice-president of the Mercedes-Benz Vans division in Canada. “We are looking forward to setting new benchmarks in the mid-size commercial van segment by means of the Metris’ unmatched combination of cargo capacity, payload and efficiency.”

All Canadian Mercedes-Benz dealers will sell and service the Metris, beginning in October. The van is powered by a four-cylinder turbocharged gasoline engine producing 208 hp and 258 lb.-ft. of torque. It will be mated to a seven-speed automatic transmission. The powertrain will boast a 25,000-kilometre service interval.

Mercedes continues to gain ground in the Canadian van market. In 2014, it sold 4,077 Sprinter vans, an increase of 19.1%. The Sprinter underwent a complete redesign last year and is now available with crosswind assist and in a 4×4 configuration, which De la Peña told Trucknews.com has been well received in Canada.

“Since its launch in Canada in 2010, the Sprinter has rightfully earned a huge amount of respect from the industry and from its owners as a truly impressive large van. We have learned a great deal in the last five years and are now fully prepared and excited for the imminent arrival of the Metris in Canada,” De la Peña further added.

Sales of Sprinter vans have also been brisk in the US. Bernhard Glaser, vice-president and managing director of Mercedes-Benz Vans USA, said Sprinter sales grew 18% in 2014, making the US the second strongest market for the van in the world, behind only Germany.

Mercedes was first in the US market to offer a European-styled van as well as a diesel engine. It now enjoys 30% market share in metro areas, Glaser claims. He said he’s expecting the Metris to be as well received as its larger sibling.

“We are now a full range vans provider with payloads and price points that cover a much broader spectrum than ever before,” Glaser said during the unveiling at the NTEA Work Truck Show. 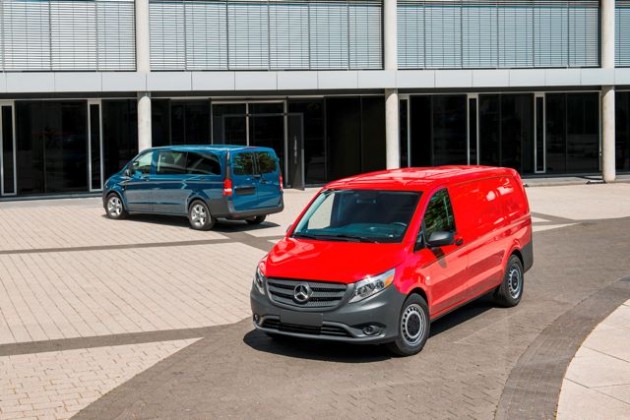