LAS VEGAS, Nev. – The new Cascadia, introduced by Freightliner in 2017, has already received some updates that will improve its fuel efficiency by up to 5%.

“The day after we launched it, we were already looking at how to make it more aerodynamic and further improve and integrate the powertrain to make it more efficient,” Kary Schaefer, general manager of product marketing and strategy for Daimler Trucks North America, said during the Consumer Electronics Show. She pointed out that since its launch in 2017, the new Cascadia has received sales and orders exceeding 145,000 units.

It, and other advancements over the past decade, brought a 30% fuel economy improvement over the original Cascadia launched in 2007. Another 5% has been achieved this year through further updates to aerodynamics and powertrain integration.

Three new fuel efficiency packages will be offered on the new Cascadia this year. Standard updates will include aerodynamic tow hook coverings, and new deflectors mounted to the A pillars. The optional Aero package will feature further streamlining, thanks to enhanced chassis fairings and side extender seals. The most advanced package, the Aero X, will feature another half dozen upgrades, including an optimized front bumper, an optimized roof fairing deflector, flexible front wheel well covers, and optimized drive wheel fairings. It will also bring to market an industry first: an aerodynamic ride height control, which at highway speeds automatically lowers the front end of the truck by about an inch to improve airflow. Drivers will be able to override this feature when on uneven surfaces or in bad weather.

Also contributing to the new Cascadia’s fuel economy improvements are updates to IPM6 (intelligent powertrain management), which brings greater predictive capabilities to the DT12 automated transmission. Brian Daniels, product manager, components with Detroit, said IPM6 allows the truck to see the road ahead and adjust its road speed to take advantage of kinetic energy when climbing, cresting or descending grades.

The company has increased, by 35%, its coverage of the North American road network. It is now programmed with grades for 600,000 additional road slope miles, bringing the total to nearly a million. Many of these additions are in central Canada. The new Cascadia will also come with a new maintenance system that analyzes oil temperature data to recommend oil change intervals based on the truck’s actual usage.

“It could mean doing maintenance less than what’s published, and it could also mean extending maintenance intervals,” Daniels said. On the other hand, it could alert fleets to the need to change oil more frequently in severe-duty cycles.

Jason Krajewski, director of connectivity, highlighted some enhancements to Detroit Connect. He said fleets are finding new ways to take advantage of remote parameter updates, including derating trucks that need to be brought in for service. Up to 20 more parameters that can be changed remotely will be added later this year.

Over-the-air (OTA) software updates are also ready to roll – all that’s missing is a software update, which should become available later this year. Every new Cascadia is delivered enabled for OTA updates. This allows fleets to update their engine software remotely from one location, without bringing each truck in off the road.

DTNA is also piloting Detroit Connect Direct, a way to deliver to the fleet the data they want, when they want it. It is also the first truck maker to introduce in-cab pairing, a way for drivers to pair their mobile device with the truck so the vehicle can deliver hours-of-service or other data natively from the vehicle to the device.

Third-party hosting is also coming. It simplifies a fleet’s ability to integrate telematics from third-party providers. DTNA can reduce hardware requirements and the related maintenance by fully integrating the services offered by third-party providers. A list of approved partners will be coming in the next month or so, Krajewski said.

Another new offering is an optional digital dash layout. The primary display, which includes the instrument cluster, is 12.3 inches and a 10-inch touchscreen display resides on the B-pillar. Optical finger navigation – think of a computer trackpad – buttons are mounted to the steering wheel to allow easy navigation without taking hands off the wheel. These displays would replace the standard five-inch display and traditional truck gauges found today.

“This is fully digital, versus mechanical and digital,” Krajewski explained.

New features include full braking when moving pedestrians are detected, and adaptive cruise control (ACC) down to zero miles per hour.

“We are the only OEM to offer full braking on moving pedestrians,” Schaefer noted. “When the bumper-mounted radar and forward-facing cameras detect someone in the truck’s path, it will activate an audible alert and a warning brake for the driver. If no action is taken, the truck goes into full emergency braking.”

Adaptive cruise control to 0 mph allows drivers to engage ACC in traffic situations and allows the truck to maintain a safe following distance at low speeds. Other enhancements include automatic wipers and headlights, and intelligent high-beam lenses that activate and deactivate depending on traffic conditions. The new version also recognizes speed limit signs and constantly displays the current speed limit inside the cab.

Another new option in 5.0 is blindside detection along the entire length of the tractor-trailer. DTNA is also offering driver-facing cameras, which can provide insights into driver behavior before, during and after an automatic braking event. 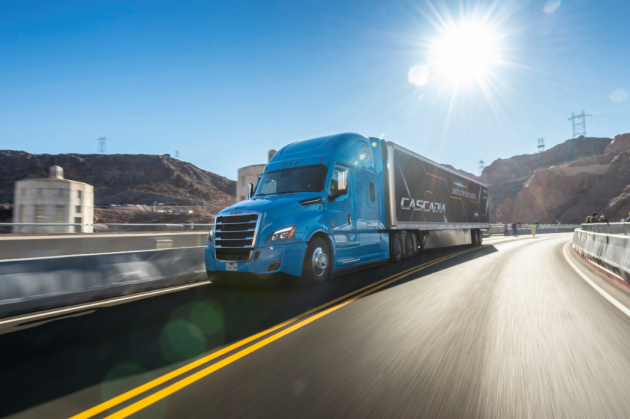