INDIANAPOLIS, Ind. — The falling cost of battery packs, to less than US$197 per kWh, is the biggest driver of electrification in medium-duty truck applications. That was a message from Jim Castelaz, founder and chief technology officer of Motiv Power Systems, who was speaking about electrification at the Green Truck Summit here March 5.

Challenges to adoption remain, however, including range anxiety and a lack of charging infrastructure. Catelaz said his company has focused on the medium-duty segment for just those reasons, since those vehicles usually operate in low-mileage duty cycles, close to home. 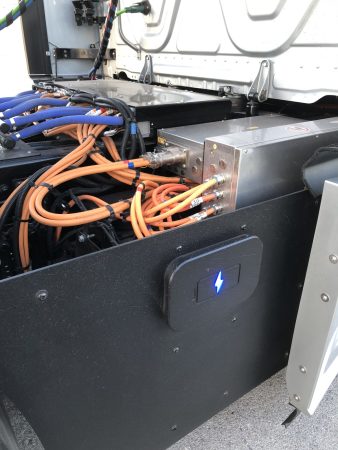 Motiv uses BMW battery packs, because the scale in the passenger car market has brought battery prices down further than in the commercial vehicle segment.

“We use passenger car batteries. The power-to-weight ratio is lower, so we stress the batteries less than in passenger cars,” said Castelaz.

The goal is for battery prices to come down to the $80-$100 kWh range, which will make electrification viable for most medium-duty applications. But that doesn’t mean adoption will be simple.

“There are real challenges you need to think through when doing electric vehicle deployments,” said Castelaz. “But we are a lot further on than we were a couple years ago, and we have battery bank prices to thank for that and a more mature supply chain overall.”

Prices for other components, such as high-voltage connectors, have also come down in recent years, thanks to the proliferation of electric vehicles. Motiv Power customers have found electric trucks to deliver tangible benefits. One, AmeriPride, has deployed nearly 30 electric trucks and is experiencing 95% uptime, an 85% reduction in operating costs, a 66% savings in maintenance, and 100% driver satisfaction. It has racked up 100,000 miles on its electric truck fleet.

The biggest challenge for the company, Castelaz acknowledged, was developing the charging infrastructure.

“We’re at an interesting inflection point now, driven by battery prices coming down. What’s going to be the critical path now for the industry is not battery packs,” he said. 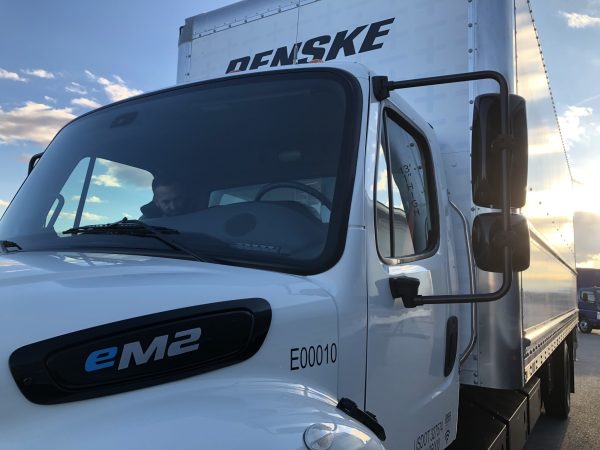 Bill Combs, director, connected fleet with Penske Truck Leasing, said the leasing giant is working to get electric trucks into customer applications. Benefits include reduced air pollution, lower fuel and maintenance costs, and noise reductions. He said it will take the entire industry to discover and overcome all the challenges related to deployment.

In addition to the vehicle and the charging infrastructure, fleets must also understand the implications on: parts availability, service, range, payload, grants and incentives, and familiarity with electrical utilities. Education and training are required, even on the driver’s part.

“It takes a good chunk of our entire business to make sure we succeed at deploying electric vehicles,” Combs said.

Penske is currently testing Freightliner’s new eM2 Class 7 truck, and will also deploy its eCascadia Class 8 once available. The company is in the process of installing charging infrastructure where those trucks will be deployed and it will work closely with Daimler Trucks North America to assess their performance.

Electric trucks, in addition to driving operating savings, are also a hit with drivers. Castelaz said drivers appreciate the lack of noise, vibration, smell and heat.

“These guys spend eight hours a day in a truck,” he said. “It’s not a good working environment if it’s noisy and shaking.”

He said one driver said driving an electric truck changed his life, as it eliminated the back pain he suffered from vibration.

While electric trucks generally weigh more than those with internal combustion engines, the weight penalty isn’t as severe as widely perceived to be, noted Mike Roeth, executive director of the North American Council for Freight Efficiency (NACFE). In a sleeper truck, about 7,800 lbs comes out of the truck before the electric powertrain is installed, namely in the form of fluids, the engine, aftertreatment and all the brackets and tubing associated with them.

With battery costs having come down and truck availability improving, Roeth said the main hurdle to electrification today is charging infrastructure. A recent white paper on the topic (see pg. 27) examined this issue and concluded return-to-base operations are the most practical to convert in the short term.

“This takes away a lot of the unknowns,” Roeth said at the Green Truck Summit. He also warned that fleets should expect installing charging infrastructure to take longer and cost more than expected.

Many types of chargers are available. Jonathan Ells, director, fleet sustainability with NYC Fleet, outlined some of the chargers used in New York City. They range from tow-and-play solar chargers to outlets retrofitted into city light poles. As the municipal fleet adds heavier trucks to its electric vehicle roster, it will look to adopt a gas station-type model, with fast level three charging to support bigger batteries.

Don Francis, executive director of Clean Cities Georgia, advised fleets to work with their local utilities before planning charging station installation. They will have useful advice such as where to locate the chargers, and some may even offer to install the chargers at their cost and add a line to the fleet’s power bill so it becomes an operational expense rather than a capital expense.

“The usual conversation I have with a new fleet that’s looking at going to electrification is, ‘What is this going to do to my power bill?’ That’s the wrong question to ask. Where you are going to spend the money is on what it’s going to take to get power to the site,” Francis explained.

He also urged fleets to consider future requirements as they scale up.