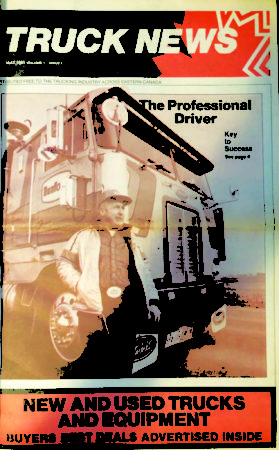 TORONTO, Ont. — “You have in your hands the very first issue of Truck News, a new publication servicing the truck industry in Eastern Canada. It features up-to-date news, stories and important advertising information. We look forward to your continued readership in the coming months and hope you find Truck News a valuable guide to industry information.”

Those words, penned by Truck News founder and original publisher Brian Light, introduced the newspaper – it was very much a paper in those days – to the Canadian trucking industry in May, 1981. Nearly 40 years later, the publication is transitioning to an online format, in keeping with readership trends.

It has been a nostalgic couple months at Truck News, which included digging through a storage locker to find the very first issues of the paper. We thought it would be fun to go back through the first year’s editions to find out what the hot topics for the industry were.

The very first 28-page issue contained stories on: keys to success for the professional driver; learning to drive in school; and understanding air brake systems. It also defended truckers after an article in Canadian Motorist magazine “slammed truckers.”

“In their April 1981 issue, Canadian Motorist magazine launched a sensational attack on truckers and trucking in general,” the article read. The article in question featured a cover with a menacing looking trucker, cigarette dangling from his mouth, in front of an even more menacing rig. The headline read: “Warning: This Man May Be Hazardous to Your Health” and the story went on to suggest truckers were “Knights no more” and that “it’s their way or no way on the highway.”

Yes, truckers were being vilified as far back as 1981, and Truck News quickly endeared itself to readers by going to bat for them.

By the end of 1981, Truck News had already grown to 40 pages. It was a family effort. The masthead that first year named Brian Light as publisher, and Pam Light as editor. Brian Light and Wade Davey handled advertising. A new Peterbilt Model 359 was advertised in the ‘Summer’ issue for $70,992.

The monthly issues resumed in September, with a cover story on “Women in Trucking – Moving into the Mainstream of the Industry.”

The cover featured a photo of Cindy Malley, a student at the George Brown Transport Training school.

“It’s a typical scene. A trucker pulls into a truck stop, parks the rig and goes into the restaurant for a late-night meal. After finishing the meal, the driver decides to make a quick phone call before heading out on the road again. However, these days the chances are that the driver might just be a woman, and the person waiting for a phone call at home is her husband or boyfriend!” the article read.

It went on to report that in the past 20 years, “the number of women in the workforce has grown rapidly…Lots of wives have gone out to work to ease the financial burden on their husband.”

Full-page promo ads in Truck News espoused the virtues of the paper, which at the time was mostly black and white and on newsprint. “Truck News is easy to read. Bold type, short concise articles, straightforward organization starting with Page 3 with a table of contents and list of advertisers.”

The publication has stayed true to those roots, but has evolved over the years. It has gone through multiple ownership groups including Southam, Hollinger, Glacier Ventures, and its current owners, Newcom Media. It gradually moved to glossy, full-color paper. It continued covering the biggest issues facing the trucking industry, some of which – such as women in trucking – have remained topical since its inaugural year.

The biggest transition facing the publication is its move to an online-only format, beginning in January. But one thing that won’t change is its commitment to covering the Canadian trucking industry and bringing you the news like no other outlet.

To continue receiving the news from the same team that brings you Truck News each month, be sure to subscribe to our newsletters at TruckNews.com.