Rob Piccioni is a contrarian. He doesn’t like to do what others are doing. He likes to take the road less traveled, and march to the beat of his own drum.

It’s partly why he decided to start his own trucking business in 2004. After working for years in trucking as operations manager for another brokerage, Piccioni decided he needed a change of culture, and started a company he could be proud of. 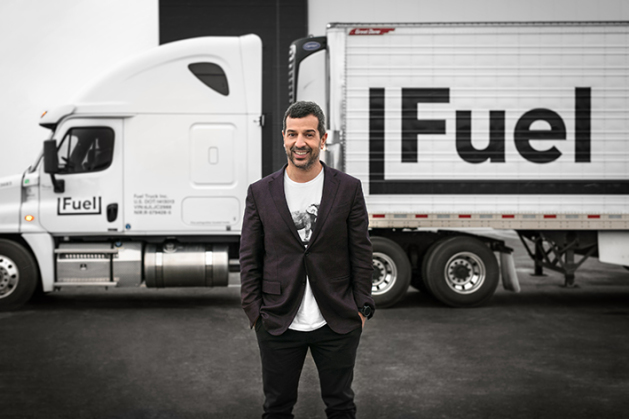 “I was well-compensated and doing well, but I didn’t like the culture and I didn’t like the direction of the company I was working at,” he explained. “I decided that Monday morning was coming around way too soon and I didn’t want to be part of it anymore. I left and I learned a lot of things about what to do, but I learned a lot of stuff on what not to do. I applied it to what I believed was a proper and good working environment. I started a company with the intentions of earning a living doing honest, transparent, fair, quality work with our customers and with our suppliers and it grew. I never dreamt of it growing to the size it is today.”

Fuel Transport is both a non-asset and asset-based carrier. With offices in Montreal, Toronto, and Chicago it moves general freight – everything from airplane parts to beer – across Canada and the U.S.

Today, even though it’s not the largest trucking company in the nation, it is proving to be one of the best in Canada, thanks to Piccioni’s unconventional thinking.

Take for example, the company’s hiring process. While many other transport companies hire those with a transportation background, Fuel doesn’t.

“We hire character over talent,” he said. “We hire good people over skill set. Obviously, we do identify the qualities and skill sets and professions or abilities of people, but we hire character and good people first. The majority of people that work in operations have no prior transportation experience in operations. The majority, I’d say 98% of the people here, that we’ve hired operationally, have no prior experience in logistics or in trucking.”

And this tactic, said Piccioni, has helped the company achieve its greatest success to date – having a strong, unstoppable team.

“Over the years what that does, is pay dividends,” he said. “We have a lot of retention and we have little turnover, and we have quite a bit of great synergies within our company, which in itself has allowed us to develop our relationships with our customers and with our suppliers as well. The greatest strength of Fuel is our people and the quality of the people that we’ve attracted and that we have been able to maintain and keep over the years has been a huge strength for us. That’s where we get traction with our customers. We’ve built a mid-sized business that does a substantial amount of money over nine figures.”

Driver turnover is low at Fuel as drivers enjoy benefits like earning a salary at the higher end of the spectrum, driving new equipment, and having a director who understands how drivers want to be treated, like giving them flexible schedules and ensuring they have enough home time.

“Our head of trucking (Martin Tranquille) does not have an office,” Piccioni said. “He sits right in the operations department with a safety manager to his left and the whole operations team right in front of him. It’s a completely open environment and the drivers are walking in and out of there and having a completely transparent, open discussion.”

But Piccioni is the first to admit, the business isn’t perfect and it has its challenges.

“Our greatest challenge is sustaining the business model that we’ve developed, continuing the business model,” he said. “I think that’s a big challenge because we are experiencing some expedited growth, and the way we hire and the way we train takes time. People don’t come into this company and make an impact they want. We take our time developing. It’s going to be a balancing act between managing the growth as well as making sure that we have the right qualified personnel behind that growing structure that’s in place. We have our issues. That’s not something we shy away from, either. Full transparency – we’re not the perfect company, but that’s what we’re trying to do.”

Most recently, Fuel was one of the first carriers to put down a deposit to buy four of Tesla’s new Class 8 Semis. After hearing Elon Musk speak about the future of trucking at the Semi unveiling, Piccioni was impressed because Musk presented solutions for everyday problems that exist on the road with trucks.

In the future, Piccioni says his hopes are that the business continues to succeed and grow.

“I don’t see the business diversifying itself too much,” he said. “I believe in sticking to what we know best and continuing down that path. Hopefully, we can make an impact and change the way things are done and bring more value to our industry as a whole. I want to be a leader in over the road transportation in North America. I want to make an impact.