BRESLAU, Ont. — Learning to change with the times is not easy for trucking companies that have been around a while. But without embracing the change that comes with the advancing trucking industry, success is hard to achieve.

Brian Kurtz Trucking was founded in 1980. Kurtz caught the trucking bug when he was just 16 years old working at his uncle’s farm.

“That’s where I first got to drive truck,” Kurtz said. “And I loved it. I thought it was so educational between the people you meet and the places you see – I really enjoyed it.” 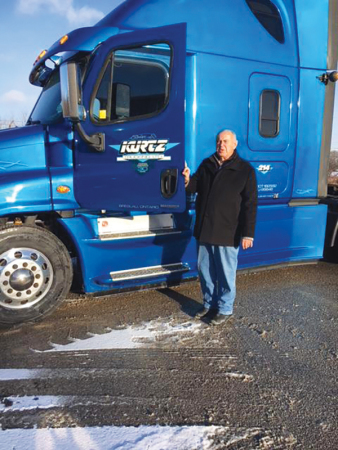 From there, he bought his own truck at 22, and worked as a broker for Day & Ross. At 31, he started his own company Brian Kurtz Farms, where he was hauling steady freight for different customers, and a year later he changed the name to Brian Kurtz Trucking.

Today, the business is based in Breslau, Ont., a small community outside of Waterloo, Ont. The company has 48 highway tractors, 22 regional trucks, and 136 trailers, 60 of which are dry box – the rest are refrigerated units.

Brian Kurtz Trucking specializes in hauling hazardous materials or “placarded freight” as the president himself says.

“But then we also haul produce,” he said. “On any truck we could have 20 skids of paint and four skids of clothing. We haul anything you can think of.”

Today, as much as Brian Kurtz is known for his shiny blue trucks, it is also known to be one of the most decorated trucking companies in Canada. It has won the Truckload Carriers Association’s National Fleet Safety Award multiple times, as well as being named one of Trucking HR Canada’s Top Fleet Employers for two consecutive years.

And while for some, being in the industry for so long can make you pine for the good ol’ days, Kurtz is actually looking forward and positions himself as a forward thinker. It’s this thinking that has made the company such a success.

For example, he is a big proponent of getting more women into the industry and says it could solve the severe driver shortage in trucking.

“I think hiring women is one of the best ways we can help the driver shortage,” he said. “We have seven female drivers working here for us, and three husband-wife teams. They’re happy to be out there, making the same money as the guys, with no macho ego attached.”

Kurtz also has a rather modern managerial approach. Instead of being the feared boss that many baby boomers grew up knowing and being, Kurtz says he tries his best to be understanding and level-headed.

“We are the best company out there at keeping our employees, and keeping them happy,” he said. “Where other people are quick to fire employees, I make sure not to do that. If somebody comes in that’s made a mistake on the road that is costly, I make sure to go over it with them. Because we want them to understand and learn from it. We will give them a week off if need be.”

It also helps that Kurtz knows trucking inside out, he says, and that his four sons, who also work at the business, know trucking as well.

“Today our driver turnover is only 12%,” he said. “It used to be zero, but now my older drivers are starting to retire so that’s where the 12% is coming from. But our drivers like working here. And I think it’s because we are one of the only trucking companies left that are family-oriented. When people come here to work for us, they say they are blown away because right off the bat, they are treated like family, and no other company is doing that.”

The good equipment and pay is helping too, Kurtz said.

“We’re also among the top in rate of pay in North America for our drivers and mechanics,” he said.

Since hauling freight across the border, Brian Kurtz Trucking has had to roll out electronic logs throughout its fleet to stay in compliance.

“We had eight drivers who were like me, very old school, and didn’t want to use them,” he said. “But since they’ve been on them, they tell me it’s not as bad as they thought. After a few months we audited seven of our drivers to see the results, and of those seven, no one was out of money. In fact, one driver even got paid $7,000 more. And all my drivers say when they go home, they’re not sleeping, they’re actually spending time with their family.”

Ultimately, Kurtz says this is just the start of trucking getting even better.

“I think in five to 10 years, once everyone is on the same playing field in Canada and the U.S. with e-logs, rates are going to go through the roof, and there’s going to be so much change for the better,” he said. “I’m hoping that’s how it goes. It’s going to be really tough for people who didn’t embrace change and jump on ELDs in the future.”