EFFORT, Penn. — Some parents will go to great lengths to teach their child a lesson.

Take Joe Fiduccia, for example, who says he built the world’s first fan-built replica of Optimus Prime to teach his son the value of commitment and the rewards that come with chasing your dreams.

Fiduccia isn’t who you’d expect to be the face behind the big blue and red truck. He’s not a trucker; never has been and doesn’t have an interest in the profession at all, actually.

He doesn’t have a particular interest in big rigs, either. He just really liked the Transformers films. 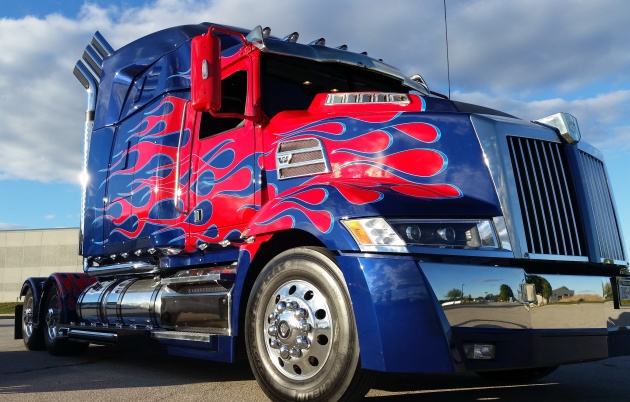 “I’m a middle-class dad, 38,” he said modestly to Truck News. “I have no interest or experience in trucking at all. I’m just a big Transformers fan and Optimus Prime fan. I like what he represents and his morals. So, when my wife and I were thinking of taking on a new project, we decided on this.”

The project began in late 2015, when Fiduccia reached out to Hasbro to get permission to replicate the truck. After that, he touched base with Western Star, who built the truck from the factory floor. Finishing touches were put on the truck in the summer of 2016, when it officially rolled on the highway for the first time.

“All we had were the photos and videos we’ve seen in the movies and on the Internet,” Fiduccia said. “We didn’t have blueprints to work with from Hasbro for example. We scoured the Internet for any photos or videos so we could replicate the parts exactly.”

Today, the truck is fully operational. Fiduccia even got his CDL so he can legally drive it. The truck mostly goes to truck shows, children’s hospitals, and comic conventions, where it can be gawked at by Transformers fans of all ages. Most recently, the truck made it to World of Wheels, taglined as America’s Premier Custom Show Car Series, in Indianapolis.

The replica also offers some local services in the Monroe County area of Pennsylvania where Fiduccia lives and works. You can surprise someone special and let them spend an entire day with Optimus Prime for $175 or get a ride to school in the truck for a $125, according to the truck’s Facebook page.

And the services it offers go to show Fiduccia’s true colors. He really built the truck to make everyone, his son especially, smile.

“If I’m driving down the highway…I can’t tell you how many people are taking pictures,” he said. “And that was the main reason for building Optimus…if I can make someone smile for a few seconds on an otherwise bad or normal day for them…that sits well with me. It’s more than a paint job, it’s an icon. It’s a symbol of good and I’m honored to sit in the driver’s seat.”

So far, the replica hasn’t really taken off financially. It hasn’t received any special sponsorship or recognition from anyone in the Hasbro or Transformers world. So for now, Fiduccia is funding the project on his own.

“People ask me all the time how much it cost and I don’t like to give a figure,” he said. “I say to them, ‘a life savings and a second mortgage.’ I’ve had no financial backing from anyone else whatsoever.”

And while Optimus does take up a lot of his time, Fiduccia still works at his full-time job running an Internet business called America’s Footprints, where parents and grandparents can create and leave a digital legacy for their kids or grandkids.

Thankfully, despite the financial situation, his wife and mom have been with him, supporting him all the way.

“As far as the support goes…despite all of the financial struggles, my wife especially has supported me all the way. I don’t think it would’ve been done without her help and my mom’s help. I don’t know how many other husbands or wives would support such an endeavor,” he said.

But Fiduccia said the biggest motivation for his seeing this project succeed, more than making money or making other Transformers fans smile, is bringing enjoyment to his nine-year-old son Ryan.

“I really did this to inspire my son,” he said. “I wanted to make something that would inspire him for the future. For me, actions speak louder than words. So, I could tell him until I’m blue in the face to pursue your dreams, but I wanted to show him how to do it. And if I failed, at least I could show him I tried. My hope now is if it’s not now, it’s 10, 20, or 30 years from now, he can look back and see what I did, and know he can do whatever he wants.”