From our man in Windsor comes word that Fiat Chrysler Automobiles (FCA) has converted its Detroit-based fleet of 179 trucks to natural gas.

Ron Stang reports the 179 leased Peterbilt tractors are fuelled with CNG at what the company is touting as the biggest private fast-fill CNG station in North America. The fast-fill pumps can fill a CNG tractor as quickly as a diesel-fuelled tractor, the company claims.

What’s really interesting is that Chrysler is choosing to convert to natural gas at a time when US diesel prices are at about $2.75/gallon.

“What people may not realize is that natural gas is also at historical lows,” FCA Transport head Martin DiFiore told Ron. “So let’s say diesel at a US price per gallon was $2.75. At that price point my payback will be just under a year.”

The conversion came at a cost of about $40 million. These CNG-fuelled trucks service Canadian locations as far from Detroit as Brampton. FCA hasn’t yet decided to convert its Canadian-domiciled trucks but I think the move is worth noting, especially if you count Chrysler among your customers as they are clearly taking a lead in converting to CNG for both economic and environmental reasons.

Ron’s full report on Chrysler’s conversion will be in the February issue of Truck News. 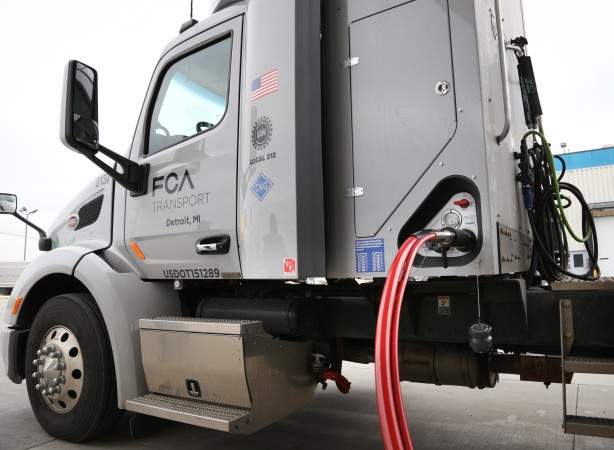 FCA US hosted dignitaries and UAW officials to celebrate the largest private fleet of natural gas-powered semi-trucks in the state of Michigan on Dec. 4, 2015.