Allison has come out with its first automatic transmission aimed at the Class 8 tractor market and Erb Group is one of the first Canadian fleets to take delivery of it. They deployed five International ProStar tractors with MaxxForce engines mated to TC10s and will be carefully comparing the fuel economy of these transmissions to their current fleet of manual and automated manual-equipped trucks.

Allison claims it should have an edge, especially in applications with frequent shifting, because the torque converter allows for seamless powershifting and enables drivers to get up to speed more quickly. An AMT suffers a brief torque interruption every time a gear is changed.

The Allison transmission was very nice to drive and even when fully loaded, it routinely started out in third gear and got up to 10th extremely quickly. It can provide some extra rpm for passing or hill-climbing at the touch of the button, which is a nice feature to have and a feature I abused.

The TC10 is a sophisticated piece of equipment. It has an inclinometer to determine road grade and always seems to select the most appropriate gear. If you insist on trying to outsmart it, it will allow you to manually select gears as long as those gears make sense.

The knock against the TC10 is that it’s expensive and heavy. It weighs in at over 1,000 lbs and could impose a weight penalty of as much as 245 lbs compared to an AMT. However, it’s currently offered exclusively with the MaxxForce 13 engine, meaning you can recover that weight and more if you’re downsizing from a 15-litre.

As for price, it will cost you a premium, but Allison is claiming fuel economy savings of 5%, and much more than that when deployed in regional-haul applications with frequent stops and starts. That kind of improvement, if realized, will allow forward-thinking fleets with an eye towards total cost of ownership to justify the added acquisition cost. 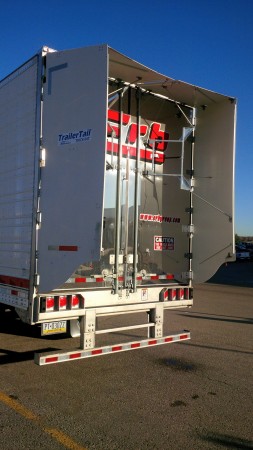 Erb Group will be monitoring fuel performance using fuel tax reports. Corporate fleet director Jim Pinder told me this eliminates the varying degrees of ‘optimism’ reflected in ECU-generated reports. He also said he’ll share the results with me in a few months’ time and I’ll be sure to pass them along to you in this newsletter.

These are exciting times at Erb. They are aggressively updating their fleet with new tractor and trailer purchases, and they’re trying some new technologies in the never-ending quest to bring down operating costs. Before the ink had time to dry on the new MOU allowing trailer tails in Ontario, Erb placed an order for 350 units. I saw one of the first of these while visiting Baden.

After my drive I had the chance to chat with Jim Pinder and Wendell Erb and they’re thrilled with how the new trucks are performing. The fuel economy they’re getting is unprecedented and they don’t even have to wait for the usual break-in time before getting good results, they say. It’s amazing what OEMs can do when they’re not chasing down the next EPA-imposed emissions target and can instead focus their R&D dollars and resources towards improving the efficiency of the products they currently have. You can read my full review of the TC10 ProStar here.