Next up was the Freightliner 122SD tri-drive heavy-haul tractor; a Canadian spec’ that will find a home in the Alberta oilfields. This beast featured a large classic-styled hood, a 70-inch mid-roof sleeper, a Detroit DD16 engine putting out 600 hp and 2,050 lb.-ft. of torque and an Eaton UltraShift Plus 18-speed transmission. It was geared to haul loads grossing 210,000 lbs and was really never meant to be bobtailed. But bobtail I did, because it was the only option in the small, picturesque town of Yountville. I would love to take this truck for a drive north of Edmonton with a fully-laden trailer in tow.

Even without a trailer, it was old-school truckin’, looking out over that big hood and sitting so high above everyone else. What I really liked about the truck was the matte black paint scheme, which made the ample chrome bits really pop. The truck had highly-effective Bendix disc brakes on the front and drums on the rear and without the 200,000-plus pounds it took some adjusting to – particularly after just finishing a drive in the little M2.

The 122SD has given the Freightliner brand a fully capable true, purpose-built heavy-hauler to add to its portfolio. It’s a worthy successor to the Coronado, if and when they choose to retire that model (Freightliner hasn’t yet indicated any plans to do so but there appears to be some overlap). With the 122SD, you’d be hard-pressed to find a job too demanding or rigorous for Freightliner, with its new focus on the vocational market, to take on. 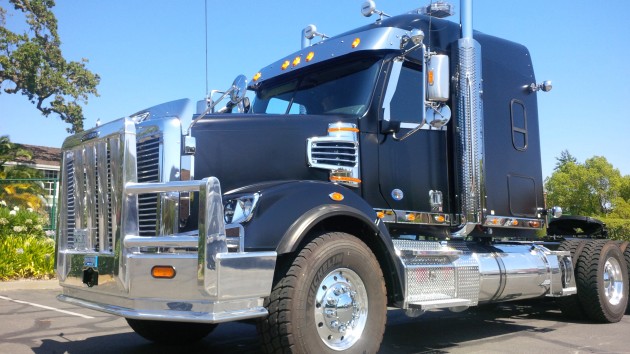