Cummins and Eaton have made a big slash with their SmartAdvantage integrated powertrain, featuring the ISX and the Fuller Advantage Series automated manual transmission. However, it hasn’t made much more than a ripple here in Canada because to date, it’s been limited to a GVWR of 80,000 lbs. A 110,000-lb GVWR version is in the works but for now, there’s a lesser-known but equally impressive powertrain offering available from the two companies. 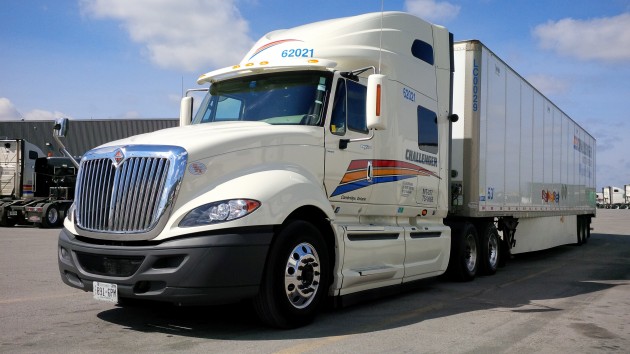 I’m talking about the ISX15 mated to the UltraShift Plus LSE (line-haul small step efficiency) automated transmission, which so far has been available only in International trucks. That exclusivity arrangement came to an end in August, so this powertrain will now be offered to other OEMs. It remains to be seen who will make it available.

So far, the engine/transmission combo has been well received in Canada. Challenger has 10 of’em, added about a year ago. I recently spent a couple hours driving one such truck and found it to be extremely driver-friendly. The LSE is a 16-speed transmission with a small 17% step (about half of what you’d normally see) between gears. This allows for quick, precise shifting and the ability to skipshift like it’s nothing at all.

I had a load of peas for this drive and grossed about 80,000 lbs but the nice thing about the ISX15/LSE combination is that it’s rated right up to 110,000 lbs. This gives carriers like Challenger the versatility they need to handle a wide range of freight demands. The truck I drove has been deployed in Challenger’s team operations running Cambridge-Vancouver. I want to thank the drivers who let me use their truck while they enjoyed a couple well-deserved days off. They’ve been running this truck hard; after just a year in service it already had more than 300,000 kms on it. For my driving impressions, check out the review here.