With the Freightliner business sessions behind us, it was time to hit the streets of Yountville, Calif. and surrounding highways in a variety of Freightliner trucks. I first opted for the smallest of them, an M2 106 powered by a Cummins ISB6.7 engine producing 325 hp and 750 lb.-ft. of torque. This 26,000-GVWR can be driven sans CDL, but carrying a light payload it was grossly overpowered, which made it a lot of fun to drive!

The truck was equipped with an Allison 3000RDS with PTO provision and turned on the tip of a corkscrew. The body was a custom job from Knapheide, but since the truck was to be used as a SmartPlex training vehicle it housed flatscreen TVs instead of heavy tools, part of the reason it was so flush with power. Also back there was a Stellar 3315 electric crane. I love the paint job on this truck – look how the sun glints off it so. The M2 remains a popular truck in the Freightliner stable, given its versatility, handling and maneuverability. 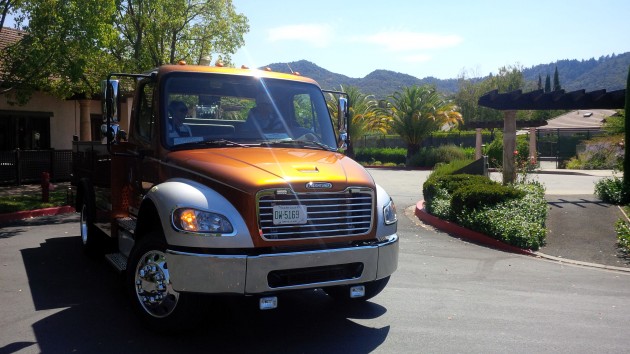